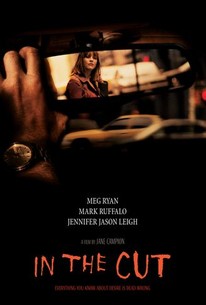 Critics Consensus: Director/co-writer Jane Campion takes a stab at subverting the psycho-sexual thriller genre with In the Cut, but gets tangled in her own abstraction.

Critics Consensus: Director/co-writer Jane Campion takes a stab at subverting the psycho-sexual thriller genre with In the Cut, but gets tangled in her own abstraction.

Critic Consensus: Director/co-writer Jane Campion takes a stab at subverting the psycho-sexual thriller genre with In the Cut, but gets tangled in her own abstraction.

In the Cut Photos

Following the brutal murder of a young woman in her neighborhood, a self-determined NYU professor dares to test the limits of her own safety by propelling herself into an impossibly risky sexual liaison with a detective. As the affair increasingly pushes the limits of sexuality, she grows wary about the motives of every male with whom she has contact--including the detective.

Critic Reviews for In the Cut

In the Cut is masterful in its suggestion of the ambient, omnipresent air of sexual threat that exists in traditional heterosexual dynamics.

As in Portrait of a Lady, Campion demonstrates great faith in the fantasy sequence as a guide to the psyche, but this time the device seems simplistic .

The thriller elements are half-baked and predictable. The violence is never scary nor repellent.

I still consider this the best (which also means the sexiest) Campion feature since The Piano, featuring Meg Ryan's finest performance to date and an impressive one by Mark Ruffalo.

Joe Lipsett
Anatomy of a Scream

...may not be pure Campion, but it's also the sort of movie only Campion could have made.

In the Cut -- if what we have on screen is the best part of the film that made the cut, one can only imagine the dearth of unsavoriness that landed on the cutting room floor - the place this entire film should be.

This doesn't mean that Ryan is bad in the film, for she's not -- she's merely adequate, if a little bland, in a bad picture. And In the Cut is indeed a bad picture; surprisingly bad, really, given the pedigree involved.

The plotting and police procedural aspects of In the Cut are perfunctory and unconvincing, and for all its air of breaking new ground, it is ploughing down some familiar furrows.

There's nothing terribly involving or enlightening in this brooding fever dream about life and death on the dingy margins of the city.

Audience Reviews for In the Cut

Cast: Meg Ryan, Mark Ruffalo, Jennifer Jason Leigh, Kevin Bacon, Nick Damici, Sharrieff Pugh Director: Jane Campion Summary: Frannie (Meg Ryan) is a New York writing professor entwined in an erotic affair with a police detective (Mark Ruffalo) who's investigating the murder of a young woman in Frannie's neighborhood. But soon Frannie begins to suspect her lover's involvement in the crime. My Thoughts: "Considering the cast I was expecting better, but it was just so not good at all. The acting was there, but the story and all of the other stuff just was crap. Usually I will recommend a movie even when I don't like it, or care for to much, but this isn't even worth that. Just a pointless, boring, and too long of a film."

"in the cut" was an erotic novel written by susanna moore before jane campion adapted it into a woman's picture stirred with family drama, romance, trust. gore and sex. i read that damned novel before i watched the picture, which didn't interest me at all for the sake of meg ryan (=chick flick).jane campion tends to quieten and soften the brash tone of sadomasochistic perversion in the book, where susanna moore reveals her thick obsession with fellatio and forcible semi-rape fornications. basically the scenario is a literature-teacher accidentally witnessing a woman performing fellatio to a man in local bar when she tries to find a restroom. later she discovers the fellatio-girl is murdered by the man, whom she guess might be the police lieutenant who inquests her for the peculiar tatoo on his wrist. somehow the woman professor ends up bedding this macho lieutenant who is excellent at oral sex while suspecting he might be the ferocious killer who disposes of the fellatio girl. the condition worsens as the professor's best-friend/half-sister has her head chopped off in the bathroom sink, and at the same time professor finds the remains of her friend's jewlry in the lieutenant's pocket after a naughty fling of stormy lovemaking. so she flees for rescue and leaves the lieutenant handcuffed, but unwisely she's trapped in the hands of the real killer. i'm a literatue-major, i cannot help but focus on the book, which is harsher, dirtier and far more nasty then the movie could have ever been, written in a pseudo- stream of consciousness way of first person narration. the book could be a feminist noir for having the woman as the one to collect all the fissures of murders just like the detective in noir, of course, conventional noir is male sap crazing for the femme fatale, and here our woman is drooling over men, her homme fatale with her brazen talks of nymphmaniac desires. the most morbid part is probably that she gets titilated to watch that fellatio sex in the bar and masturbate at night imagining her lieutenant as the head-receiver. she's aware this man could be a pervert, murderer and she gets horny for IT, enjoying his various rough ways of abusive matings as well as the notion of him enslavening her on bed. in the end, even the killer is not the lieutenant but it is very obvious why she gets misled so. (because subconsciously the idea of bedding a killer is quite an appetizer to her, and the mixture of gore and orgasm is quite an turn-on for her)...the passage of her naked revelations of desire is actually quite sickening to read along as if this woman wishes to be FUCKED TO DEATH!! wouldn't the noir men in james m cain's novels, like double indemnity, be also like that? they wish for a taste of the super-cunt then perishes with it as walter cannot resist phyllis, as robert mitchum voluntarily chooses to drive together with jane greer in "out of the past" to rush toward self-ruin. this book surely has one of most jaw-dropping ending for self-ruin. ain't noir always about mascochist's reckless cost on the quest of libido-fulfillments? but the movie is DIFFERENT despite the basic plots are the same. jane campion tenderizes it with a touch of family romance. champion adds the part of the woman's visualized montages of her father proposing to her mom in ice-skating, and her reminiscence of the family past before her dad left her mom with a broken-heart, and that casts a shadow of doubt over her relationships with men. the movie uses that part to reflect the woman's emotional states: when her half-sis is killed, the montage gets deformed into a nightmare of his dad cutting her mom's legs with ice-skater. when she finally survives over the killer's devilish claws, the montage transmutes into her mom terminates the father with a pistol. when she disintegrates the negative pattern of family drama, she could manage to reform a more positive relationship with the opposite sex. meg ryan is far more ladylike than susanna moore's lascivious protagonist in the book, and she acts more like a sympathetically astayed woman who melts with a man due to human frailty and spritual desolation for the lack of a caring father figure. fellatio is only mentioned for the murderous scene and the movie tends to focus much more upon cunniligus to rid off its misogynistic elements.(it's quite an irony such woman-insulting novel is actually written by a woman) jane campion is quite creative to envision ways to joint the genre of noirish horror with the tint of woman's picture, which is about romance and her disorientated journey for affections, but somehow campion might encounter the dillemma of not pleasing audience in both genres. i admire such gritts and courage, and it is indeed pitiful this movie is so under-rated and neglected, even smart critic like rogert ebert cannot really grasp what campion tries to say. i must say "in the cut" would probably be much cooler if it was directed by david lynch, who is quite good at rendering misogynistic neo-noir materials. (ps) due to my usual dislike over meg ryan, i think i'm the only one who is fair enough to give it the rating it deserves without bias. honestly meg ryan and mark ruffalo are much hotter in their nudes than i have ever expected! if the movie is gonna be made as susanna moore wrote in the novel, jennifer jason leigh is probably a much better choice than meg ryan.

Didn't know that Meg Ryan could be such a nasty girl, and oh boy was she ever nasty in this movie. Each of us posses a nasty side I am sure, But the movie itself is about a serial killer, who is killing young women and butchering them up into small little pieces and removing the head, hummm whets up with that. Anyway movie has a number of twist, I caught ion 1/2 way through who the killer was but I suspected everyone in the movie at one time or another. Its worth a rent or a buy 4 stars Meg you can handcuff me anytime.

In the Cut Quotes