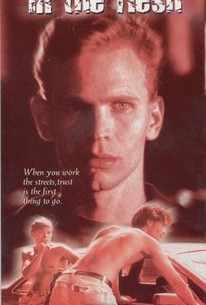 A gay cop is torn between duty and attraction in the drama In The Flesh. Olivier (Dane Ritter) is a college student who sometimes makes some extra money working as a hustler at a gay bar. Philip (Ed Corbin) is a detective investigating a drug dealing network that may be linked to the club where Olivier hangs out. Olivier and Philip had a brief fling some time ago, and when Olivier witnesses a murder linked to the case Philip is investigating, Philip creates an alibi for him and lets him stay at his place. Before long, the two find themselves in a relationship again, and Philip has balance the tensions of his ongoing investigation with his feelings about commitment in general and Olivier in particular. In The Flesh was the directorial debut for screenwriter Ben Taylor, who previously penned several successful German features.

Critic Reviews for In the Flesh

There are no critic reviews yet for In the Flesh. Keep checking Rotten Tomatoes for updates!

Audience Reviews for In the Flesh

Barely adequate drama with one of the two leading men apparently unable to make any sort of facial expression beyond a blank stare.

In the Flesh Quotes