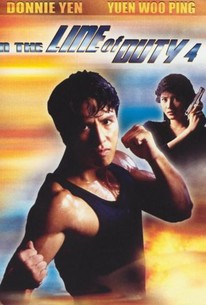 In the Line of Duty 4 Photos

Cynthia Yang Li-chang stars again in this fourth installment of the popular series directed by Yuen Woo-ping. The film opens with straight arrow American longshoreman Luk Wan-ting (Yuen Yat-chor) stumbling into a police raid, in which he gets blamed for a DEA agent's death. Now a murder suspect, Luk flees to Hong Kong with Madam Yeung (Yang) and street cops Donny (Donnie Yen Chi-tan) and Michael (Michael Wong Man-tak) in hot pursuit. When they finally catch him, Luk is shot by a shadowy assailant before he is extradited. As Luk is the lucky survivor of one assassination attempt after the next, Yeung begins to suspect that Michael isn't necessarily on the side of the law. As it turns out, he's a CIA agent selling drugs to the inner cities to finance terror campaigns in Central America.

Critic Reviews for In the Line of Duty 4

There are no critic reviews yet for In the Line of Duty 4. Keep checking Rotten Tomatoes for updates!

Audience Reviews for In the Line of Duty 4

The 80s where were good times when it comes to the action genre for giving us such classic as Die Hard, Indiana Jones, Police Story, and many, many more. So it's no surprise that some of the lesser action know film, like the one i'm reviewing today, are bound to get overlooked. In The Line of Duty 4: Witness revolves around two detectives who are up to their necks in trouble and team up to stop crooked CIA agent. The plot is decent and has enough action to satisfy those fans of Donnie Yen. Even though I expect it the movie to get complicated, it's simple and functional and reaches many themes like friendship, betrayal, and immigration. I don't know if it's a direct continuation of the previous films in the series, but the characters don't feel developed. There's not one character that really stood out to me, but Donnie Yen did stand out as an actor. Out of his earlier films that I've seen so far this is by far one of his better efforts. It's actually exciting, funny, and you're just not going to hope for someone to come out of nowhere and fight Donnie Yen. I liked the Asian cast, they did good job acting and fighting. The Americans actor aren't as good, especially one who fights Donnie in a alley and starts making funny facial expression. I did recognize of these actor, but unfortunately I don't know his name and I would have never imagined Donnie Yen beating the same guy in two different movies playing a similar characters. The action scenes were solid, though the best ones where when vehicles were included. In The Line Of Duty 4: Witness should satisfy fans and non fans of the series with a solid. While not huge on plot, it's big on action and one of the lesser know action movies from the 80s you'll enjoy.

More fast and furious fourth installment of the "In the Line of Duty" series. Cynthia Khan and Donnie Yen are good teamwork.

In the Line of Duty 4 Quotes