In the Name of the King: A Dungeon Siege Tale2006 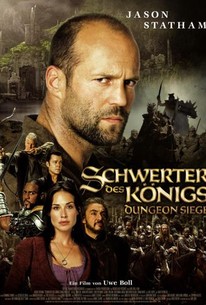 Critics Consensus: Featuring mostly wooden performances, laughable dialogue, and shoddy production values, In the Name of the King fulfills all expectations of an Uwe Boll film.

Critics Consensus: Featuring mostly wooden performances, laughable dialogue, and shoddy production values, In the Name of the King fulfills all expectations of an Uwe Boll film.

Critic Consensus: Featuring mostly wooden performances, laughable dialogue, and shoddy production values, In the Name of the King fulfills all expectations of an Uwe Boll film.

In the Name of the King: A Dungeon Siege Tale Photos

Uwe Boll's fantasy adventure film In the Name of the King: A Dungeon Siege Tale stars Jason Statham as Farmer, a simple man from the Kingdom of Ehb whose goal as the story begins is to care for his family. However, when the power-hungry Gallian (Ray Liotta) invades the kingdom, Farmer must abandon his simple existence in order to rescue his wife (Claire Forlani) and save his king (Burt Reynolds). This film is a cinematic adaptation of the video game Dungeon Siege. ~ Perry Seibert, Rovi

Will Sanderson
as Bastian

News & Interviews for In the Name of the King: A Dungeon Siege Tale

View All In the Name of the King: A Dungeon Siege Tale News

Critic Reviews for In the Name of the King: A Dungeon Siege Tale

It's as if someone had thrown a whole lot of money at Ed Wood and let him go wild, minus the angora.

Don't go for the campy laughs; there are none.

Only Uwe Boll would assume that the moviegoing public craved a trashy Lord of the Rings rip-off starring Burt Reynolds and Matthew Lillard, and only he could then manage to make such a potentially riotous endeavor so humorless.

If this isn't Boll's best effort to date, it's better than his usual output. If he can continue to improve, his name may no longer be synonymous with a punch line.

Like actors in an amateur stage play, the large, mostly all-star -- or has-been star -- cast of In the Name of the King: A Dungeon Siege Tale look, rather dazedly, to be playing dress-up.

I would never recommend this film to anyone who was going to take it seriously. [Full Review in Spanish]

Will any other movie ever be as amazing as this one?

LOTR copycat is so bad it's good -- for laughs.

It's not bad enough to warrant burning copies of, rather it'll sit on the back of video store shelves for the rest of its time and that's where it should stay.

Audience Reviews for In the Name of the King: A Dungeon Siege Tale

This is a terrible film all the way, God knows how they got such a good cast. It rips off so many good, bad and old fantasy films and not in a good way either, just in a hammy cheap way. The story is the usual old rubbish, the effects are poor and the acting is real cheese. They also manage to stick some martial arts nonsense in there too, as hordes of faceless monster baddies get their arses kicked by the ugly looking Statham without realising once this guy might be a bit good. Everything is predictable and cliched to the max, it gets two stars for some nice cgi landscapes here and there. Could of been a cool homage to the old hack n slash Capcom arcade games 'Dungeons & Dragons'...if you get me, but they just go down the overly used martial route these days.

Uwe Boll attempts to make his very own Lord of the Rings and the results are hilarious. I mean, I've seen some bad writing in my life, but this movie has got to take the prize. Combine that with cringe-worthy acting, videogame-ish CGI, crappy editing and questionable directing, and you have a disaster waiting to happen. The whole movie is constructed like a house built together with cheap glue and ducktape, where the only saving grace was its adequate portion of mindless action. Or, in my case, the cool sensation of having met two of the actors in the film in real life (John-Rhys Davies and Ron Perlman). Anyway, as a final word to Uwe, I'd just like to vent the following: Please, I beg you! Stop destroying all these great concepts and respectable game titles! Stop squandering away so many good actors and rid us of the tragedy and misery that is your film-making! Because whatever ego trip you're on, trust me, you're not making the world into a better place. Oh, and by the way, the next time you attempt to make a fantasy movie, try not to include ninjas and boomerangs.

Tons of stars means I will give this 2 stars. Thats it. This movie was so bad for what it was . . . just a shame.

In the Name of the King: A Dungeon Siege Tale Quotes