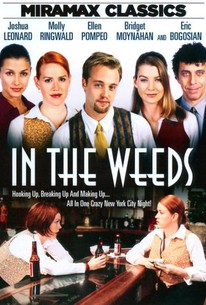 In the Weeds Photos

Along with Eric Bross' Restaurant, this debut feature from writer-director Michael Rauch is one of a spate of turn-of-the-century indie films to chronicle the lives, loves, and fears of ambitious hipsters toiling away in the food service industry. Set in a trendy SoHo eatery, In the Weeds employs an eclectic cast: The Blair Witch Project's M.I.A. cinematographer Joshua Leonard as the neophyte waiter who dreams of writing plays; former Brat Packer Molly Ringwald as the grizzled waitress who shows him the ropes; and one-man-show veteran Eric Bogosian as the bistro's aggressive, upwardly-mobile owner. The title of the film is taken from wait-staff lingo for being backlogged with demanding customers.

Rene Millan
as Hector
View All

Critic Reviews for In the Weeds

Audience Reviews for In the Weeds

Pre-Grey's Anatomy Ellen Pompeo. Post-fame Molly Ringwald. A decent movie that could have been better. Good actors, for the most part. Lame story for the most part, too. It tried to be almost good...

In the Weeds Quotes