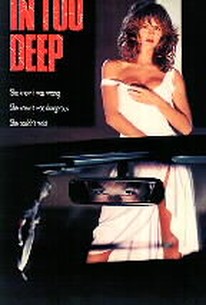 Heat, both climatic and erotic, imbue this Australian thriller from first-time directors Colin South and John Tatoulis. The film takes place in mid-summer in the sweltering city of Melbourne and concerns a love affair between Wendy (Santha Press), a jazz singer, and Mack (Hugo Race), a knife-wielding punk who wants to be a rock star but is planning to rob a bank. Wendy's younger sister, 15-year-old JoJo (Rebekah Elmaloglou), has moved in with Wendy, and she is rapidly becoming sexually aware, because she is secretly observing her sister and Mack as they make love. Meanwhile, two cops -- Dinny (Dominic Sweeney), an inexperienced rookie, and Milas (John Flaus), a weary veteran cop -- are following Mack because he has an audiotape in his possession that shows evidence of government corruption. ~ Paul Brenner, Rovi

Tom Coltraine
as Man in Bar

Chris Young
as Man in Bar
View All

Critic Reviews for In Too Deep

There are no critic reviews yet for In Too Deep. Keep checking Rotten Tomatoes for updates!

There are no featured reviews for In Too Deep at this time.

In Too Deep Quotes