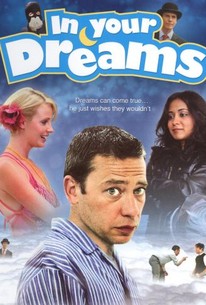 A man with the power to glimpse the future in dreams seeks the aid of an amateur sleuth in discovering the secret of his power and preventing an approaching tragedy in this quirky romantic comedy starring Dexter Fletcher and Linda Hamilton. When Albert Ross (Fletcher) lies down to dream, the future appears before his eyes. If Dexter's visions are correct, a sexy bombshell will soon appear to liberate him from his boring life while fulfilling his every sexual fantasy. But recently, Dexter has been dreaming of death, and in order to keep that vision from becoming a reality the sleepy clairvoyant seeks out the help of an investigator (Hamilton) who may have the power to change the future.

Critic Reviews for In Your Dreams

There are no critic reviews yet for In Your Dreams. Keep checking Rotten Tomatoes for updates!

There are no featured reviews for In Your Dreams at this time.

In Your Dreams Quotes