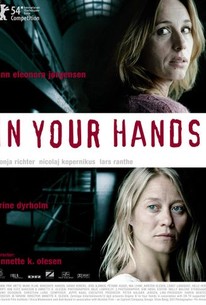 In Your Hands Photos

Anna (Ann Eleonora Jørgensen of Italian for Beginners) has just been hired as the chaplain at a women's prison. Inexperienced, but compassionate and energetic, she begins to feel her way amongst the prisoners. Soon, a new prisoner, Kate (Trine Dyrholm of The Celebration), is transferred to the prison and causes a stir. Marion (Sonja Richter of Open Hearts), a junkie, has heard that Kate helped another prisoner get clean and goes to her when her fellow prisoner and dealer, Jossi (Sarah Boberg), cuts her off. Marion kicks heroin, and believes that the introspective Kate has healed her. When Anna gets wind of this, she goes to see Kate, but Kate doesn't want to talk to her. She's even a bit hostile, telling Anna to look after herself and the baby in her belly. Anna believes herself infertile after fruitlessly trying to have a child with her loving husband, Frank (Lars Ranthe). She's shocked to discover that she is actually pregnant, but her joy turns to dismay when she learns that the fetus may have a serious birth defect. Meanwhile, Henrik (Nicolaj Kopernikus), a mild-mannered guard, finds himself increasingly drawn to Kate, to the point of putting his job in jeopardy, while the ruthless Jossi, losing business, feels threatened by the strange new inmate. Writer/director Annette K. Olesen and co-writer Kim Fupz Aakeson made In Your Hands in the Dogme style, shooting on video at Nyborg State Prison. The film was shown at the 2004 Berlin International Film Festival and selected by the Film Society of Lincoln Center for inclusion in New Directors/New Films.

Critic Reviews for In Your Hands

In Your Hands means to convey the divinity of human interaction.

Annette K. Olesen's women's prison drama, like so many Scandinavian films, is heavily shadowed by the titanic influence of Ingmar Bergman.

Considering 2005's line-up of truly overwhelming blockbusters, it's refreshing to know that films like In Your Hands are still being released.

It's unusual to see issues of faith and religious belief dealt with so engagingly on screen and Olesen's direction ensures that your attention is held from the start.

Thoughtful, gripping, introspective filmmaking with a strong sense of character and story.

There seems little point to the Dogme trappings...if the work is going to veer into such hyperbolic, melodramatic territory in its plot.

Audience Reviews for In Your Hands

There are no featured audience reviews yet. Click the link below to see what others say about In Your Hands!

In Your Hands Quotes