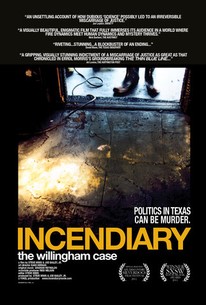 In 1991, Cameron Todd Willingham's three daughters died in a Corsicana, Texas house fire. Tried and convicted for their arson murders, Willingham was executed in February 2004 despite overwhelming expert criticism of the prosecution's arson evidence. Today, Willingham's name has become a call for reform in the field of forensics and a rallying cry for the anti-death penalty movement; yet he remains an indisputable "monster" in the eyes of Texas Governor Rick Perry, who ignored the science that could have saved Willingham's life. Equal parts murder mystery, forensic investigation and political drama, Incendiary documents the haunted legacy of a prosecution built on "folklore." -- (C) Official Site

Alarming viewing for anyone who cares about the American justice system.

Raises interesting and important questions but suffers from poor organization and glosses over or ignores inconvenient facts.

It's a sobering look at the danger of fallible people making irreversible decisions.

Mr. Martin is confident in his convictions. The filmmakers are confident about their science. Justice, this strong documentary asserts, is at risk in the division.

Incendiary exposes a crucial social dialectic without affixing a relatable, if reductive, human face to the center.

Incendiary in every sense of the word.

As sober as a lab report, the excellent documentary metes out its findings with calm precision.

Rather flatly told but still engaging throughout, this doc should appeal to both newsmagazine junkies and those impassioned by the death penalty debate.

starts as a meticulous deconstruction of injustice, but ends up feeling more like an elaborate, preaching-to-the-choir anti-Perry campaign film

Despite the occasional broad-brush stroke, the filmmakers refuse to tell the viewer which side to take. There's no big-bang ending that tells the audience, once and for all, where the film or filmmakers stand.

There are no featured reviews for Incendiary: The Willingham Case at this time.