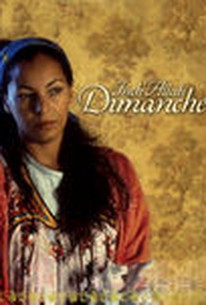 Set in 1974, when the French government decided to allow the families of Algerian men working in France to legally emigrate to join them, Inch'Allah Dimanche tells the story of one such family. Upon arriving in France with her three children, Zouina (Fejra Deliba), is sent off to live in a house that her husband has rented for them. Unfortunately, she quickly realizes that her husband has no intention of allowing her to see the country as it exists outside of the house, and is prohibited from leaving. Without friends and family and constantly under the surveillance of her domineering mother-in-law, Zouina finds her only source of relief is Sunday -- the film's title translates to "Thank God for Sunday!" -- when her husband takes his mother out for the day and Zouina and the children are able to explore the outside world. ~ Rebecca Flint Marx, Rovi

A topnotch central perf by the attractive and convincing Fejria Deliba combines with well-observed details that bring the tricky assimilation of a generation of immigrants to life.

There's a warmth to Inch' Allah Dimanche that transcends its many character-development flaws.

A poignant story of a woman who leaves her mother, and moves to France to be with her traditional husband and a mother in law in-terror! I thought the movie was slow, but I enjoy nice slow drama sometimes. But this movie seemed to really go nowhere...and I was very, very confused about why it ended the way it did. A decent film that left me wondering "what was the point of it all?".

Zouina moves to France when the French government allows families to reunite. Life away from Algeria is tough - especially with a mother-in-law from hell. Zouina has her moments. As much as she is allowed she rebels, making a few local friends. I prefer to believe that she will succeed in this new land, but the life of this set of immigrants was extremely difficult.

A great portrait of a women struggling to find freedom for herself in country that doesn't speak her language and in a family and culture that is abusive and oppresive to her.