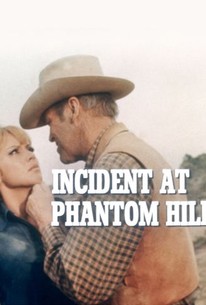 In this western, set at the end of the Civil War, a group of rebels steal a million bucks from a Union shipment, and stash the gold in a cave near Phantom Hill, Texas. They are subsequently captured. The ring leader bargains with his captors offering to reveal the loot's location in exchange for his freedom. The Union soldiers set out to find the gold. They take the outlaw with him. An Apache attack ensues. Afterward, the outlaw gets a pair of soldiers drunk and kills them. He then flees leaving the rest of the weaponless Yankees to die. Meanwhile the outlaw finds the gold and falls in love with the Yankee leader's girl. Back in the desert, the Yankees endure another attack. The remaining two manage to catch up with the outlaw and the girl. In the ensuing battle, the girl throws the outlaws' gun to the Union leader who shoots him dead. The gold is sent back north and the lovers ride off into happiness. ~ Sandra Brennan, Rovi

There are no critic reviews yet for Incident at Phantom Hill. Keep checking Rotten Tomatoes for updates!

There are no featured reviews for Incident at Phantom Hill at this time.