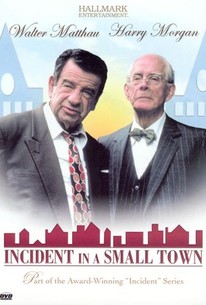 Walter Matthau, Stephanie Zimbalist, and Harry Morgan star in this made-for-television drama, in which a judge in a small town discovers that the skeletons in his family closet are aired for all to see after he's named as a prime suspect in the murder of his son-in-law.

Dennis O'Connor
as Know It All
View All

Critic Reviews for Incident In A Small Town

You may figure out who did what and why a little before Cobb, but the plot isn't bad for a Sunday night movie, and watching Matthau, even as he walks or shambles through his part, is easy duty.

There are no featured reviews for Incident In A Small Town at this time.

Incident In A Small Town Quotes