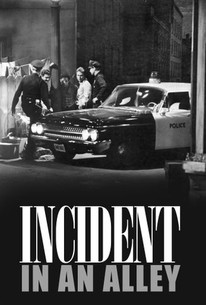 Rod Serling penned the story on which this crime melodrama was based. The trouble begins when as a policeman rushes toward the scene of a robbery. En route he hears a woman scream in a dark alley and gets there just in time to see someone tearing away. The cop calls out, but the runner does not stop. The cop opens fire and fatally shoots a young teenage boy. Apparently the youth had only accidentally bumped the lady and knocked her down. Though the cop is eventually acquitted, his reputation amongst his peers is destroyed. This leads the disgraced officer to launch his own investigation in hopes of clearing his sullied name. ~ Sandra Brennan, Rovi

Bobby Fox
as Harvey
View All

Critic Reviews for Incident In An Alley

There are no critic reviews yet for Incident In An Alley. Keep checking Rotten Tomatoes for updates!

Audience Reviews for Incident In An Alley

There are no featured audience reviews yet. Click the link below to see what others say about Incident In An Alley!

Incident In An Alley Quotes