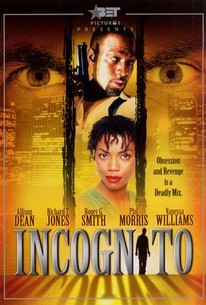 A rapist named Derek Scanlon (Phil Morris) has insinuated himself into the life of wealthy African-American socialite and business executive Erin Cortland (Allison Dean). Fearing for her life, Erin turns to her fiancé, Quinn (Roger G. Smith), but he turns out to be even more timorous than she. In desperation, Erin hires two-fisted black bodyguard Jake Hunter (Richard T. Jones) -- and to no one's surprise, a romance quickly develops, despite the obvious cultural and sociological differences between heroine and hero. Deftly combining the well-worn "stalker movie" genre with late-20th century African-American sensibilities and concerns, Incognito was one of several features produced by Roy Campanella II on behalf of the Black Entertainment Television network. Based on a suspense novel by Francis Ray, the film first aired on September 17, 1999.

Vanessa A. Williams
as Wilhelmina

There are no critic reviews yet for Incognito. Keep checking Rotten Tomatoes for updates!

There are no featured reviews for Incognito at this time.