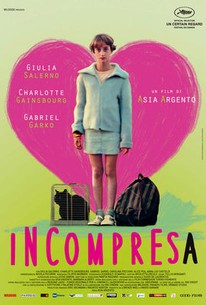 Set in Rome in 1984, a young girl, Aria (Giulia Salerno) is the victim of her parents' divorce in this dramatic but darkly humorous film from director Asia Argento. Her parents Charlotte Gainsbourg and Gabriel Garko relentlessly quarrel and are selfishly too involved with their own lives to pay attention to the little girl. School is no better for Aria because although she is doing well academically, she is teased and considered a misfit by her peers. Aria, who feelings isolated, finds comfort in her best friend, Angelica and a black stray cat named Dac. Cast includes Olimpia Carlisi, Anna Lou Castoldi and Alice Pea.

An occasionally strange, occasionally brutal and occasionally lovely work that goes up on the shelf with "The Ocean of Helena Lee" and "Girlhood" as one of the more impressive coming-of-age tales of recent times.

Ms. Argento has a florid visual style, and she likes turning up the heat.

The ostensible boldness of Misunderstood is undermined by the sense that it's also pandering-that its view of childhood as a bourgeois horror-show is at least as salable on the art-house circuit as it is authentic to its creator's experiences.

[A] universal and enjoyable story told with lively verve and a lot of imagination.

Coming of age in a broken home has rarely looked better than it does in Asia Argento's Misunderstood.

Misunderstood is only slightly dependent on the self-pity that informed Asia Argento's last effort, The Heart Is Deceitful Above All Things, but it feels similarly airless.

Imaginative, spontaneous and lots of fun. [Full review in Spanish]

In a semi-autobiographical mood, Asia Argento crafts a vivid, charismatic portrait of one big mess of a family.

In the end, Argento's vision fully unhinges ... [a] frustratingly uneven but beautiful film.

Sarah Winshall
Under the Radar

One of the pleasures of Misunderstood is the acid-tinted picture it paints of its two parental antagonists.

A thrilling and brutally charming experience in spite of its dark perspective.

There are no featured reviews for Incompresa (Misunderstood) at this time.