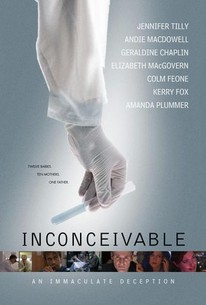 A physician who helps his clients bring new life into the world is accused of an ethical breach that's also criminal in this independent drama. Dr. Freeman (Colm Feore) is a doctor who runs an upscale fertility clinic in Las Vegas, Nevada. Freeman specializes in helping women who have had trouble getting pregnant conceive, usually through artificial insemination techniques or transplanting donated eggs into his patients. Over the course of several weeks, Freeman inseminates nine women from different walks of life, ranging from middle-aged but newly married Lottie (Andie MacDowell) and a lesbian whose reproductive clock is ticking, Elsa (Donna D'Errico) to Frances (Geraldine Chaplin), an aging socialite who needs a son to inherit her husband's fortune and sassy, outspoken Salome (Jennifer Tilly). Of these nine women, eight become pregnant and give birth to healthy children, but when the new mothers compare notes, they discover their children bear a striking resemblance to one another. When journalist Tallulah (Elizabeth McGovern) looks into their story, they begin to suspect that Freeman used his own sperm to fertilize his patients rather than the donor samples they selected, a breach of conduct that lands the doctor in court. Inconceivable also stars Kerry Fox, Amanda Plummer and Colin Mochrie; Geraldine Chaplin's daughter Oona Chaplin co-stars as Frances's grown daughter.

There are no critic reviews yet for Inconceivable. Keep checking Rotten Tomatoes for updates!

There are no featured reviews for Inconceivable at this time.