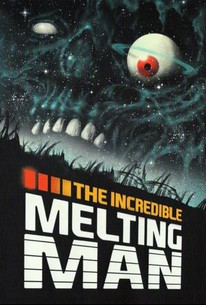 Alex Rebar stars as the title character, the lone survivor of a mission to Saturn whose exposure to a strange alien illness leaves the flesh dripping off his body.

Rainbeaux Smith
as The Model

Cheryl Smith
as The Model
View All

Even if The Incredible Melting Man were deliberately retro, re-creating the look and feel of a stultifying drive-in undercard isn't exactly a laudable achievement.

This Z-grade effort, lacking any low-budget energy, takes its cue from the central character: it's tacky and bumbling and sinks into its own morass long before its subject finally dribbles apart, slurp, glub.

Each spring brings similar releases to fill the need of drive-in operators for something cheap to put on the screen for the kids in the cars to ignore or laugh at.

There's a reason this film's appearance on MST3K lead to one of the famed series' best episodes: there's just so much fodder for filmic abuse that one can't help but crack wise while viewing it.

"Oh, my God, it's his ear!" And so it goes with The Incredible Melting Man, a piece of sci-fi cheese so pungent that it was honored with its very own Mystery Science Theater 3000 episode.

The title promises a melting man and damn it, we get a man who is melting.

Everything in the movie is corny, cheesy, bad, or some combination thereof. I'd call the performances wooden, but that would be an insult to wood.

The movie almost begs for 'Batman'-style sound-effect captions, but provided by Don Martin: 'Sklishity, skloshity!' when the Melting Man leaves his gluey footprints; 'Poit! when his eyeball plops to the ground.

When it makes moral statements, the film is at its best, although that's not saying a whole lot. The dialog is simplistic.

A rather clunky, atrociously acted potboiler.

Gooey and disgusting, and not in a good way.

Possibly one of the most iconic horror thrillers around that everyone forgets about. Its probably the epitome of schlock horror with the added bonus of having some quite dazzling practical effects courtesy of the legend Rick Baker. Get a load of that title! As with many sci-fi movies of the 70's and 80's, this film was heavily influenced by older sci-fi thrillers of the 50's that pretty much had the same plot. A dude comes back from outer space with some kind of illness or infection that slowly kills him. Sure enough, in this movie a dude (Steve West) comes back from the far reaches of space (travelling to Saturn), after getting hit in the face with a blast of radiation. Although, I'm not too sure how they managed to get back to Earth when two of the crew were fried alive and the other was left half alive. Anyway with his other two crew mates dead, he is the only survivor back on Earth. But to everyone's horror the surviving astronauts flesh is slowly melting away, his whole body is slowly falling apart, and no one knows why. Role credits...oh wait! Yes there is more, the movie continues for another hour and a half or so of simply watching this guy melt slowly. Its strange really because the movie starts off really well, the small sequence of the three astronauts in their little craft approaching Saturn's rings is quite decent. It looks really authentic with a solid little set, good costumes and good lighting, you could be fooled into thinking you're watching a serious sci-fi. Its the moment we get back to Earth the movie transforms into an extremely hammy tacky slasher thriller. For starters why would this astronaut leave the hospital and run off?? why would he even get out of bed in the first place? You're in a hospital, there is obviously something seriously wrong with you, you'd want the best help you can get, you'd want top people on the case, you'd want answers etc...Getting out of bed and running off after seeing your rotting hands and face is easily the wrong choice in my opinion. From here on things get a tad silly, first off he starts to kill people in horrendous ways, yeah that's not cool bro. OK he's gone a bit loopy from the shock of seeing himself rotting away, but would that really cause you to start killing people in a fashion that would make Jason Voorhees proud? Its at some point during the stalking carnage that we find out he needs to eat human flesh to keep his strength up...yeaaah kinda leeching of the 1968 zombie craze set in motion by Romero methinks. This means we basically get one death scene after another, all set up in cheesy ways which are so blatantly obvious they offer no scares at all these days. Its also at this point that you basically don't really care about the character of West anymore, seeing as he's slaughtering folk for no real reason other than he looks like a monster. Each victim is the predictable stereotypical type, an old couple, a single bloke who looks a bit geeky, a young married couple, some faceless cops and some military dudes, oh and there's a little girl...but she of course escapes unharmed. Amazingly there are no teens having sex that get killed off, quite surprising really considering. Despite all that its really all about the makeup and gore effects for the melting that we're interested in. Needless to say you can't go wrong with Rick Baker at the helm and he doesn't disappoint here. Admittedly the melting effects don't actually change all that much for the majority of the middle of the film, its only right at the very end we see the real money sequence. Up to that point we get lots of little gory moments with his ear coming off, his arm being cut off, various chunks of flesh and blood splodges, lots of gooey POV views from the melting mans perspective and some violent kills. For the most part he looks like a large runny cheese n tomato pizza that is dripping away but it is highly effective. But as I said the finale where we actually see the titular character melt away into a slushy, sticky, puddle of goo is by far the highlight. The vision of West's remaining eye slowly sliding down his face as his skull collapses in on itself is really terrific and haunting. Its a near perfect example of hands-on, practical effects that still holds up today, Baker the master craftsman. Its a mixed bag really. The concept is not original, the start is good, the entire middle of the film is (now) a cliched monster slasher flick, but the effects are fantastic and you do kinda feel for West, at times. Although the morality aspect of the movie is well n truly lost beneath a sea of grisly gunk. Unfortunately overall the cheap slasher-esque motif sticks in your mind and brings the movie down, not even the so called black comedy segments, which are sporadic, make any real difference. I have read it was suppose to be a more light-hearted movie at first but they changed their minds, alas you can tell with some scenes feeling out of place. The old couple that get killed are clearly an old comedy sequence left in. In the end I can't deny that the movie is thin on plot, thin on motives for the characters and of course focuses more on horror and gore. Its a movie about a man...who slowly melts away, and that's it, nothing more, nothing less...but hell I liked it!

The Incredible Melting Man is a decent B movie that displays some impressive special effects with a so-so storyline. This is one of those movies that should have been truly a memorable addition to the genre, but as it stands it's a mildly entertaining film that should have been much better than the finished product. Despite the so-so ideas on-screen, this is still a worthwhile film to watch due to effective effects, which are sure to please the most diehard gore hound. The film has a decent plot, but it could have been developed a bit more to really make this one stand out. I read that this film received a lot of flack; however I think it doesn't deserve all the negativity it has received. This film despite all its imperfections is a benchmark in special effects design and influenced many films years later. There are no standout performances as this is more a horror film that is designed to be a vehicle for its effects. With a decent story that is of course predictable, but is a fun film for what it is. If you enjoy low budget Schlock fests, then The Incredible Melting Man is the film to watch. Rick Baker's effects are the best aspect of the film, and really is the reason to watch the film. I enjoyed the film for what it was, and thought it was a really creative horror picture in terms of special effects, however the film could have benefitted from a rewrite in terms of storyline. Adding more depth to the film's story would have made The Incredible Melting Man a standout horror picture. Worth checking out and it is a gooey good time from start to finish despite its shortcomings.

Cheesy body-melt movie about an Astronaught who arrives back on earth after being hit by a solar wave in space which has caused his body to slowly melt away forcing him to kill and feed on others to renew his cells. Silly low-budget fun overall. The highlight of the movie is Rick Baker's gooey make-up effects. Most of the kills are off-screen but the gory aftermath is often shown in all its messiness. The Melting Man himself looks suitably disgusting constantly dripping with pus and blood. It's enjoyable for what it is, well worth checking out!

Campy fun for those times when you're in the mood for some '70's cheese. Gotta love a monster that leaves a trail of ooze and misc. body parts - an ear here, an eyeball there, etc,, etc., etc.