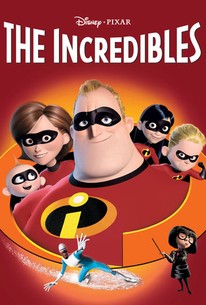 Critics Consensus: Bringing loads of wit and tons of fun to the animated superhero genre, The Incredibles easily lives up to its name.

Critics Consensus: Bringing loads of wit and tons of fun to the animated superhero genre, The Incredibles easily lives up to its name.

Critic Consensus: Bringing loads of wit and tons of fun to the animated superhero genre, The Incredibles easily lives up to its name.

Once one of the world's top masked crime fighters, Bob Parr--known to all as "Mr. Incredible"--fought evil and saved lives on a daily basis. But now fifteen years later, Bob and his wife--a famous superhero in her own right--have adopted civilian identities and retreated to the suburbs to live normal lives with their three kids. Now he's a clock-punching insurance claims adjuster fighting boredom and a bulging waistline. Itching to get back into action, Bob gets his chance when a mysterious communication summons him to a remote island for a top-secret assignment.

Critic Reviews for The Incredibles

These are lovely characters, it's a witty script, there's lots of laughs.

Incredible and action-packed fun for the entire family.

The sleek computer animation is spellbinding as usual.

Bombastic finale aside, it's a cut (and an age-range) above the simplicities of Finding Nemo.

Brad Bird strays from the Pixar formula but still delivers enough colour and thrills to keep the faithful happy.

The level of action, violence, and carnage in the film is spectacular, making this one of Pixar's most mature productions.

Brad Bird's incredibly entertaining love letter to superheroes and family, is one of Pixar's finest accomplishments to date. [Full review in Spanish]

Bird's film was a CLASSIC then, it is a CLASSIC now and will always remain so. [Full Review in Spanish]

The Incredibles is a very sophisticated movie. A rip-roaring superhero thriller, it is also a celebration of family that doubles as a not-that-subtle denunciation of a society that tells excellence to stifle itself and enforce mediocrity...

The action scenes and overall story make this a winner with all ages. A classic in its own right, The Incredibles will be around for years to come.

The film may not rank up there with Toy Story or Finding Nemo as a slam-dunk classic, but it still has enough going for it to please both children and adults.

Audience Reviews for The Incredibles

This is one of those exceptional animated films that will be forever remembered as one os Pixar's finest achievements, with a delicious family twist on the typical superhero story, spectacular action scenes and three-dimensional characters both in physical shape and personality.

Highly engaging animated comedy, The Incredibles is a highly amusing picture made by Pixar, and as you can imagine, this is a solid piece of work from the studio that constantly turn out great movies. This is a well crafted film, one that boasts a great story, a great cast of voice actors, and brilliant animation. This one of the finest films that Pixar has made and one of their most elaborate. This is a highly engaging picture, one that is sure to satisfy any viewer of every age group. The script is laced with great humorous bits, and there is a good mix of action and excitement throughout the film. This is a perfect film, one that just so much fun from start to finish and each actor chosen to voice their character are just wonderful. If you loved previous Pixar features, then you're sure to enjoy this one just as much. The Incredibles is one of the finest animated features that I've seen. There are plenty of things to enjoy here, and any genre fan will surely enjoy the film. The idea behind the film is wonderful and it is a well crafted picture and director Brad Bird delivers a stunning animated feature that is guaranteed to appeal to anyone looking for a fun and entertaining picture. If you love Pixar films, don't pass up on this film, it is a highly memorable affair, one of that is a lot of fun from start to finish. With great characters, well scripted dialogue and beautiful animation, this is a stunning piece of work from the studio, and is definitely a modern classic.

The Incredibles is actually a film better than I thought. I feared to see this film because it sounded boring. I was able to like this film. The story is about a former superhero who went into hiding with his family because of legal lawsuits. Fifteen years later, he wants to return to his old glory days. Now he has to fight one evil superhero to save the world. The acting/voicing in this film is great. Craig T.Nelson and Samuel Jackson were great. The story was written well. It keeps the audiences attracted to the film. The jazzy music is different, but good. This is a film for all ages. 4 Stars (Updated 9-16-13