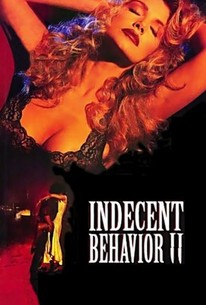 A sex therapist is forced to turn detective to keep herself out of prison in this steamy thriller. Journalist Shoshona Reed (Elizabeth Sandifer) has a knack for digging up incriminating information -- enough so that she's begun blackmailing a number of people and threatening to run incriminating stories about them if they don't pay up. Shoshona is a client of sex therapist Rebecca Mathis (Shannon Tweed), and when Shoshona is killed, Rebecca becomes a suspect in the murder investigation. To save her own skin, Rebecca begins investigating Shoshona's death, and she discovers that there are a number of people who might have wanted her dead, including Darrell Martine (Chad McQueen), a disturbed ex-convict, and Tom Mueller (Craig Stepp), a businessman with a secret. Indecent Behavior III followed this picture a year later.

Nikki Fritz
as Woman on Balcony
View All

There are no critic reviews yet for Indecent Behavior II. Keep checking Rotten Tomatoes for updates!

There are no featured reviews for Indecent Behavior II at this time.