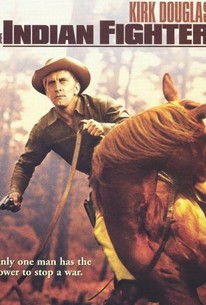 The Indian Fighter is trail guide Kirk Douglas, who agrees to shepherd a wagon train through Sioux territory. Douglas tries to convince the Sioux to leave his charges alone, but such hotheads as drunken white trader Walter Matthau and embittered Indian brave Harry Landers escalate the tensions. Douglas is forced to go "mano y mano" with Landers; Douglas wins, but refuses to kill Landers, having lost his taste for killing. But when Matthau and his partner Lon Chaney Jr. contrive to rob the Indians of their gold, Sioux chief Eduard Franz prepares to wipe out the settlers. Only when Douglas risks life and limb to bring Matthau and Chaney Jr. to justice does Franz relent. Somehow, Kirk Douglas manages to link up with two leading ladies in The Indian Fighter: his Italian "discovery" Elsa Martinelli and his own ex-wife Diana Douglas (wouldn't you liked to have been a fly on the wall at that casting call?) The first film assembled by Douglas' own Bryna Productions, The Indian Fighter is a particular treat when seen in color; incredibly, its first network telecast in 1962 was in black and white.

Alan Hale Jr.
as Will Crabtree

Critic Reviews for The Indian Fighter

It has extremely violent moments very well filmed, such as the duel on horseback with a machete, reminiscent of the best adventure movies of the time, signed by Richard Thorpe or Henry Hathaway. [Full Review in Spanish]

Audience Reviews for The Indian Fighter

Unexceptional western but Kirk is good as is Walter Matthau in an unusual role for him. A bit of trivia the actress playing the young mother, Diana Douglas, is Kirk's ex-wife and Michael's mother.