Indiana Jones and the Last Crusade1989

Indiana Jones and the Last Crusade (1989) 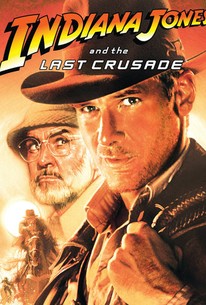 Critics Consensus: Lighter and more comedic than its predecessor, Indiana Jones and the Last Crusade returns the series to the brisk serial adventure of Raiders, while adding a dynamite double act between Harrison Ford and Sean Connery.

Critics Consensus: Lighter and more comedic than its predecessor, Indiana Jones and the Last Crusade returns the series to the brisk serial adventure of Raiders, while adding a dynamite double act between Harrison Ford and Sean Connery.

Critic Consensus: Lighter and more comedic than its predecessor, Indiana Jones and the Last Crusade returns the series to the brisk serial adventure of Raiders, while adding a dynamite double act between Harrison Ford and Sean Connery.

The third installment in the Spielberg/Lucas Indiana Jones saga, Indiana Jones and the Last Crusade evokes many of the thrills of the first two efforts (Raiders of the Lost Ark and Indiana Jones and the Temple of Doom) without blatantly copying either of them. After a lengthy prologue in which we learn how young Indy (River Phoenix) first developed a taste for heart-pounding adventure -- and his lifelong fear of snakes -- we find the grown-up Jones (who else but Harrison Ford?) teaching his archeology classes in 1938. He is approached by an art collector (Julian Glover), who wants Jones to embark upon a search for the Holy Grail. It so happens that another archaeologist has disappeared while searching for the precious goblet; it so happens further that the missing man is Indy's own father, Dr. Henry Jones (marvelously portrayed by Sean Connery). What follows is a roller-coaster of thrills, whisking both the elder and the younger Joneses to Venice, Berlin, and the most treacherous regions of the Middle East. Complicating matters is the presence of lovely Alison Doody, whose attraction to Indy -- and his dad -- does not dissuade her from her loyalty to the Nazi party. As in Raiders of the Lost Ark, the much-sought-after religious artifact in Indiana Jones and the Last Crusade is not so easily found -- and even when it is discovered, its powers are a bit too much for those impure of heart. This Indiana Jones effort set a record by grossing $50 million in the first week of release.

Jeff O'Haco
as Half Breed

Chris Jenkinson
as Officer at Castle

George Malpas
as Man on Zeppelin

News & Interviews for Indiana Jones and the Last Crusade

View All Indiana Jones and the Last Crusade News

Critic Reviews for Indiana Jones and the Last Crusade

The film endears itself to audiences by the utter idiosyncrasy of its execution.

Indiana Jones and the Last Crusade is the most wonderful lark. It is also a class act.

Not surprisingly, Ford has most of the action here. But Connery -- in what is often a test of a true actor -- shows how much you can do with an essentially passive part.

Fans of Steven Spielberg and George Lucas' Indiana Jones series may rest assured that the latest installment, Indiana Jones and the Last Crusade, is fully up to, as well as virtually indistinguishable from, its predecessors.

Though Last Crusade lacks the novelty of Raiders (and, by the way, the flat-out breathless pacing of Temple of Doom), it's an entertaining capper to the trilogy.

This is not so much a bad film as a machine-like one lacking the same energy as the original, which it most resembles.

Indiana Jones and the Last Crusade closed the decade in style.

One of the greatest finishes to any series in the history of cinema.

Somehow Indiana Jones has forgotten all of the lessons of its forebears, both film and character. It's one thing to make each film similar, it's another to give them amnesia.

Following the second outing, Indiana Jones and the Last Crusade is able to re-capture the magic that made us fall in love with Indiana Jones.

For a film that clearly sets out to make Indiana Jones his own legend, it does so in every sense of the word.

It has a grand scope and epic scale, still, but we're left with a larger idea of the man wearing the fedora.

Audience Reviews for Indiana Jones and the Last Crusade

My favourite of the three. It has plenty of action and a good mix of humour between Ford and Connery.

A hugely entertaining adventure that offers everything that made Raiders so successful and more: exhilarating action scenes, hilarious dialogue with a perfect comic timing and, of course, the pleasure of seeing Harrison Ford and Sean Connery together.

Before even the days of "Raiders Of The Ark", Spielberg had expressed an interest in making a James Bond movie but he couldn't get the go-ahead from Bond producer Albert "Cubby" Broccoli. Indy was just as good an opportunity for him, though, and who better to cast as Indy's father than (the original) James Bond himself? It's actually through the casting choice of Sean Connery that this third instalment of Indy's adventures really takes flight and silences the critics of "The Temple Of Doom". In his third outing, Dr. Indiana Jones (Harrison Ford) goes in search of his father, Prof. Henry Jones Sr (Sean Connery) who mysteriously disappeared while searching for the Holy Grail. Once again, though, the Nazi's are also in tow. After losing on the Ark of the Covenant, they too want to get their hands on the Cup of Christ. By the time of this films release everybody was fully aware of Indiana Jones. With only two films under his fedora, every woman wanted him and every man wanted to be him; Indy had already become an icon of American cinema. With a fond familiarity, people welcomed him into their homes and that's the very reason why the opening of this third instalment is such a joy. It's depiction of Indy in his youth is wonderful addition to his backstory and the late great River Phoenix does an excellent job in capturing Ford's mannerisms. We learn of his use of the whip and the resulting scar on his chin. We also get an insight into the procurement of his famous fedora and how his unusual name of "Indiana" originated from the family dog... (It was actually George Lucas' dog that was named Indiana and it also served as the inspiration for Chewbacca in "Star Wars"). After being heavily criticised for his dark tone in "Temple of Doom", Spielberg finds his lighter side again and delivers the funniest and most gleefully entertaining of Indy's adventures. The likes of Denholm Elliott and John Rhys Davies return from Raiders with more fleshed out comical roles but, as mentioned, it's the great interplay between Ford and Connery that's the biggest draw to here. The chemistry between them anchors a poignant family adventure while providing numerous father/son comedic moments. Like the previous two, though, there's no shortest of nail-biting action as World War II is on the brink and the Nazi's are once again Indy's foes and gives Spielberg another chance to put the Third Reich to the test. "Schindler's List" and "Saving Private Ryan" are obviously his more personal films on the subject but with Indy he gets the chance to have fun with them again, leaving this third instalment with more in common with "Raiders" as well as honing in on the biblical aspects of the story. Out goes the Ark and in comes the coveted Holy Grail and while the fourth film in the franchise - "The Kingdom Of The Crystal" - explores a misjudged science-fiction element, it confirms that Indy's adventures are better left in the paths of the religious or the occult. Raiders may still be the absolute classic of them all but it's hard to give a film with as much excitement and entertainment as this, anything less than top marks. Mark Walker

The third installment of the Indiana Jones story sees Dr. Jones in search of his father who disappeared while searching for the Holy Grail. Spielberg obviously learned from his mistakes of the previous film, and recaptures the spirit of the original. The film opens with a fun comic strip origin story featuring River Phoenix and once again religious myth, which is so ingrained in the popular consciousness it rarely fails to engage the necessary sense of wonder, forms the premise of the story. He replaces the irritating sidekicks with affable buffoons Marcus Brody and Sallah who return from the first film and Alison Doody spends her 15 minutes of fame as a kind of glamorous 30s Bond girl. But most importantly of all we get to meet Henry Jones Sr. Sean Connery was an inspired casting choice and Ford and Connery's brilliant father-son bickering is hilarious, especially during the best section of the film as Indiana rescues his dad from the clutches of the evil Nazis, the natural enemies of our heroes. The equal of the original film and one of the best sequels ever made, The Last Crusade proves once again that Steven Spielberg is a master when it comes to popular entertainment.