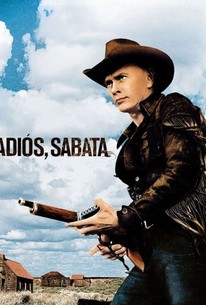 An adventure western where Brynner goes to Mexico to help some revolutionaries as a gun-for-hire. He has aims on $1 million in gold along the way, in this sequel to the film Sabata (which starred Lee Van Cleef in Brynner's role). The ruler of the land, whose gold it is, stands in the way.

Antonio Gradoli
as Major
View All

Brynner smiles scornfully most of the time which may be part of the characterization or may indicate how he feels about the whole movie.

Yul Brynner doesn't have Lee Van Cleef's sardonic charisma to make it at least fun to watch this Sabata film - which isn't much better than the dreadful other two -, with a ridiculous cartoonish villain and serious trouble with the mise-en-scène in its confusing action scenes.

Indio Black, renamed Adios Sabata to exploit the fame of the original, is an ok SW actioner. The plot is everywhere and it takes a bit to know who is chasing who and why. Yul is cool, but he doesn't have much to do here.

Ah, the dance of death.