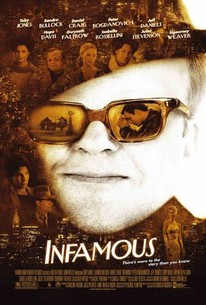 Critics Consensus: Though comparisons with last year's Capote may be inevitable, Infamous takes a different angle in its depiction of the author, and stands up well enough on its own.

Critics Consensus: Though comparisons with last year's Capote may be inevitable, Infamous takes a different angle in its depiction of the author, and stands up well enough on its own.

Critic Consensus: Though comparisons with last year's Capote may be inevitable, Infamous takes a different angle in its depiction of the author, and stands up well enough on its own.

Douglas McGrath's Infamous represents the second major biopic about the avant-garde belletrist Truman Capote to be released within a year. It thus tells roughly the same story as Bennett Miller's earlier Capote, recounting the events that belied the writer's six-year authorship of the seminal "nonfiction novel" In Cold Blood. The story opens with Capote (Toby Jones) visiting the site of the 1959 Clutter family homicide, on a Kansas research trip, accompanied by his close friend and colleague, author Harper Lee (Sandra Bullock). As Capote settles into the community, McGrath uses the preponderance of screen time to explore the emotional tapestry of Capote's increasingly risky emotional attachment to one of the two murderers, Perry Edward Smith (Daniel Craig), with whom he senses more than a few common bonds. McGrath weaves a decidedly bittersweet tale, contrasting the optimism and devil-may-care, "conquer all" attitude of Capote in his early years with a seemingly endless string of poor choices in the writer's later years, from addictions to drink and pills, to a failure to maintain healthy output as a writer, to poorly chosen romantic and sexual entanglements. Most significantly, however, McGrath reveals how the relationship with Smith virtually destroyed Capote as an artist and a human being, by inducing him to sell out on all levels to satisfy his lust for accomplishment and notoriety. ~ Nathan Southern, Rovi

Mitch Baker
as Reporter No. 1

Grant James
as Reporter No. 2

Richard Dillard
as Man On Street

This worthy second biopic of Truman Capote starts not with a bloodbath, but a cocktail.

To recreate the gossipy Manhattan arena that Capote navigated with such ease and documented with such malice, you need dialogue that rings like scatter-shot and the film's script, written by its director Douglas McGrath, doesn't have it.

Toby Jones defies the odds with an extraordinary impersonation of the author in Douglas McGrath's Infamous.

British actor Toby Jones plays Capote and certainly looks the part -- more so than Hoffman. It's a very good performance and Jones deserves his time in the spotlight.

While less beguiling than Capote, Infamous remains a soulful and searching portrayal of the writer, carried with immense charm and vivacity by its leading man.

The film's strongest performance, rather surprisingly, is by that soon to be Bond, Daniel Craig as Perry Smith.

A scene where Jones' Truman beats Jeff Daniels' crime investigator Alvin Dewey at arm-wrestling, as he supposedly beat Bogart, is in itself almost worth the price of a ticket to Infamous.

A film riddled with flaws that culminate in a disarmingly and surprisingly moving way.

The diminutive Jones was born to play Capote and his inimitable interpretation of the writer is every bit as good as Hoffman's. Unfortunately the film contains an all-star cast of rare anaemia.

There's a breeziness to the storytelling, one that delights in the tale rather than succumbing to its gravity-but that also works against it.

Toby Jones is truly great here, even though overshadowed by Philip Seymour Hoffman's fantastic performance in the far superior Capote (the comparison is inevitable), but this film suffers from many terrible documentary-like statements that explain what we can easily see.

Really good. Really well done. Really moving...Too many people compared this movie to Phillip Seymour Hoffman's movie. Not really fair, because it is taken from a different viewpoint entirely. Toby Jones is more convincing as Truman than Hoffman (and I am a very big fan of Hoffman). By the end of this movie, I was left with a heavy heart for Truman...

Having seen In Cold Blood (1967) and Capote (2005) I thought I knew what to expect from yet another film treatment of Truman's novel. Infamous, however, was a pleasant surprise. This one brought to light a little more of Capote's terrific sense of humor and a slightly different perspective on his emotional entanglement with convicted murderer Perry Smith. If Infamous is overlooked and underrated it has only Philip Seymour Hoffman to blame. Very bad timing for a pretty good film.