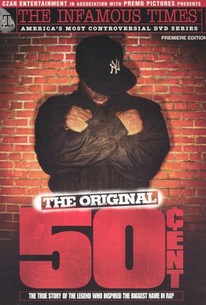 The Original 50 Cent documents the crime-filled life of Kelvin Martin, known on the mean streets of Brooklyn as "50 Cent." He became one of the most infamous criminals during the first wave of crack cocaine that swept across New York. His reputation, cemented by a violent, bullet-ridden death, inspired Curtis Jackson who would become the successful rap performer known as 50 Cent.

There are no critic reviews yet for Infamous Times: The Original 50 Cent. Keep checking Rotten Tomatoes for updates!

There are no featured reviews for Infamous Times: The Original 50 Cent at this time.