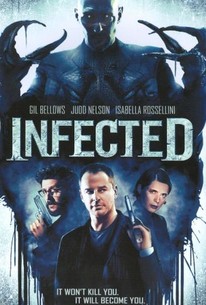 A young science wiz and an ambitious reporter make a connection between a popular vitamin drink and a highly infectious alien virus in this sci-fi thriller starring Gil Bellows and Isabella Rossellini. If you live in Boston, odds are you're guzzling Hydropure by the gallon; it's the latest health drink craze, and it's flying off of the shelves. Even the mayor has a taste for Hydropure. But when the mayor is assassinated and the triggerman slips reporter Ben (Bellows) evidence of a Hydropure conspiracy, the race is on to stop our species from being taken over from the inside. Convinced that something ominous is afoot after his colleague offers scientific proof that Hydropure is infecting humans with an alien virus, Ben and fellow reporter Lisa (Maxim Roy) set out on a mission to stop the virus from spreading and save the human race.

Critic Reviews for Infected (They're Among Us)

There are no critic reviews yet for Infected (They're Among Us). Keep checking Rotten Tomatoes for updates!

Audience Reviews for Infected (They're Among Us)

Infected (They're Among Us) Quotes