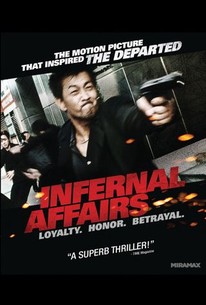 Critics Consensus: Smart and engrossing, this is one of Hong Kong's better cop thrillers.

Critics Consensus: Smart and engrossing, this is one of Hong Kong's better cop thrillers.

Critic Consensus: Smart and engrossing, this is one of Hong Kong's better cop thrillers.

As Infernal Affairs opens, Ming (Andy Lau of Full-time Killer) is being initiated into the criminal underworld by triad boss Sam (Eric Tsang of The Accidental Spy), who ends his speech to his young charges by wishing them success in the police department. Ming enters the police academy, where he excels, but sees his classmate, Yan (Tony Leung Chiu-Wai of In the Mood for Love), expelled for "breaking the rules." It turns out that Yan wasn't actually drummed out of the force, but recruited by Superintendent Wong (Anthony Wong of Hard-Boiled) as an undercover operative. Just as Ming is achieving success in the police department while secretly working for Sam, Ming is gaining Sam's trust as a triad member, while reporting to Wong. Ten years later, both men, still undercover, have grown confused about their true identities, while their bosses, Sam and Wong, wage a battle of wits against each other. Each boss learns that the other has a mole working for him, and unwittingly entrusts the mole himself to ferret out the culprit. Ming and Yan scramble to expose one another's identity in an effort to save their own skins. Infernal Affairs was co-directed by Andrew Lau (who worked as a cinematographer on several of Wong Kar-Wai's films) and Alan Mak. Renowned cinematographer Christopher Doyle served as "Visual Consultant." The film was shown at New Directors/New Films in 2003. ~ Josh Ralske, Rovi

Elva Hsiao
as May

Chapman To
as Tsui Wai-keung

Gordon Lam
as Inspector B

Internal Affairs is a deliciously twisted thriller from Hong Kong.

The pace and plot are dizzying, but the movie also works as a study of fractured identity: the two have led double lives so long they're no longer sure who they are.

Everything you'd want in a police action thriller: powerhouse performances, Grade A production values, a good script and suspenseful direction.

Beauty in its consistent, washed-out blues and silvers, grace in its understated, intense male performances and energy in its unyielding commitment to tone and tension.

What makes it special is the inner turmoil caused by living a lie. If everyone you know and everything you do for 10 years indicates you are one kind of person, and you know you are another, how do you live with that?

...an erratic yet generally rewarding endeavor...

Seductively shot and beautifully acted, this is like a summation film, bringing together all the themes, motifs, mood, and style of the gritty policier Hong Kong thriller, one that will make John Woo and Michael Mann proud.

Far too light on action to be very exciting, and far too generic and familiar to be genuinely intriguing, Infernal Affairsis ultimately a forgettable affair.

A very smart and taut thriller that prefers to focus on its characters and the relationship between them instead of jumping into action, shootings and twists as is usually expected from this kind of crime movie.

Saw it a long time ago but didn't fully grasp it. Rewatched it in October 2015. Thoughts: while the Hollywood version is more polished and higher production value, I like the ending of the HK version better. If you believe a person can change, as opposed to stark black-and-white caricatures, then the original achieves a more nuanced portrait of these complex characters.

An explosive crime-thriller. It's Heat meets Resivor dogs. Sets new standards for the cops and criminals genre. It's superb and magnificent. A tense, gritty and remarkable film in every way. It`s stylish, excellent, thrilling and unforgettable. A riveting, brilliant and absolutely sensational movie that packs pure suspense and surprises. A powerful and extraordinary piece of work. Awesomely entertaining. An incredible adrenaline-rush that wont quit and is packed with blistering action and amazing twist and turns. A stunning, deeply moving, surprisingly effective and breathtaking. This is where The Departed was found. A Hong Kong classic. Andy Lau and Tony Leung give outstanding performances. A knockout that has great charisma and a theme that's all its own

Two cops face off against each other in a race against time to discover their respective identities; one honest, working within a drug runner's gang and the other corrupt, working for the criminals. The inspiration for The Departed, this is one of the seminal Asian crime dramas of the last few years. Well, ever, in fact. My main problem with it is that I REALLY wish I'd seen it first. The difference between this and The Departed highlights the difference between HK and US movie-making in general; The Departed was full of colourful language, brutal violence and macho posturing, while this is a far more understated affair. Unfortunately this means it is far more reliant on the twists and turns of the very cleverly written plot, and so anyone who has seen The Departed already will know what's going to happen in advance. If viewed the other way round, one can still enjoy Scorsese's reinterpretation of events with his colourful and characterful fleshing out of the story. It is a quality piece of film-making, but I would seriously suggest to anyone who has seen neither to go for this one first.