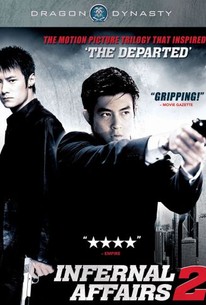 The prequel to Andrew Lau and Alan Mak's smash hit Infernal Affairs opens in 1991, with Inspector Wong (Anthony Wong) explaining the frustrations of police work to gangster Sam (Eric Tsang). He also expresses his desire to see the seemingly reasonable Sam take over he reins of the local triad from the current boss. When that boss is murdered, with no apparent heir, it seems that Hong Kong is going to explode in an all-out gang war. But the boss' bespectacled, soft-spoken, and well-mannered son, Hau (Francis Ng), unexpectedly takes charge, calmly and cleverly defusing the situation. Meanwhile, Yan (Shawn Yu, reprising his role as the younger version of Tony Leung's character in the first Infernal Affairs) is thrown out of the police academy for breaking the rules, and it's discovered that he's Hau's half-brother. Wong recruits him to work undercover in Hau's organization. Ming (Edison Chen playing the younger Andy Lau) is a corrupt cop secretly working for Sam. His progress up the ranks of the police force is swift, but his relationship with Sam is threatened when he finds himself falling in love with Sam's girlfriend, Mary (Carina Lau). For his part, as the handover of Hong Kong to China approaches, Hau plots to become involved in "legitimate" politics, and to avenge himself against those he believes responsible for his father's death. Chapman To reprises his role as the goofy Keung. Infernal Affairs II was selected by the Film Society of Lincoln Center for inclusion in the 2004 New York Film Festival.

Edison Chen
as Off. Ming

Chapman To
as Keung

I was spellbound by this film. I can't wait to see it again. It is clever on every level: period, music and performance

More than worthy companion to its powerhouse predecessor.

Infernal Affairs II contains strong performances by Anthony Wong and Eric Tsang along with some edgy music by Chan Kwong-wing.

Set during the years leading up to the British hand over of Hong Kong to China, a police inspector attempts to overthrow a Triad gang and leave it in the hands of less violent and ruthless successor. The sequel to Infernal Affairs is actually more of a prequel, fleshing out the characters and events that led up to the time of the original. It's a beautifully made and intelligent gangster movie that reveals the various shades of grey within the characters; none can really be seen as totally "good" or "bad", particularly considering Inspector Wong's manipulation of events that lead to unexpected consequences. The only real problem is the fact that it's more of a companion piece to the original than a self-contained story and as such I think anyone who watched this without having seen the original will struggle to see the significance of the events as they unfold here. But to fans of the original film it's an excellent prequel that skillfully fleshes out the story and characters with a much broader palette, making the first film an all the more satisfying experience.

Prequel for Infernal Affairs. Not quite as good. As a matter of fact, I found it much harder to follow. Well done, but the style, and intrigue, that attracted me to the first one was missing in this one. Too bad...

Despite not working out that this was a prequel and not a sequel until half way through, the film impacted hard with natural, gritty performances, a gripping storyline and some wonderful music to accompany those powerful scenes, impressive second installment.

Set before events in Wu Jian Dao, the murder of the head of the Ngai family see his son, Hau, stepping up ? immediately upsetting the power balance in the region. Small time boss Sam has a close relationship with officer SP Wong both of whom wish to see the Ngai family removed from the scene. Meanwhile, triad Lau Kin Ming is sent to infiltrate the police force and gradually work his way up with help from Sam while Wong sanctions Chen Wing Yan (the half brother of the Hgai family) to infiltrate the triads and work his way up to Hau. I approached this film wondering what it would do ? how would it manage to be interesting given that we already know (from part 1) how it goes. I also expected it to be roughly the same as the first film in terms of being an enjoyable thriller ? however this was not the case and it was hard to get into the film for what it was. The story is not really about Yan and Ming so much as it is about the leading figures behind them ? this film belongs to Sam, Wong and Hau and this was a bit of a surprise but one I was able to get over quickly and settle into a pretty interesting story where we see the shift of power in the HK crime families ? unsurprisingly framed by the shift of political power from Britain to China. However interesting it is the film lacks in several areas. Firstly the praise for the first film seems to have got to the makers' heads and part 2 is a much more overblown affair that injects every scene with a sense of overblown drama that it tries to create as oppose to earn. This is a little tiring as it seems to be forcing us to accept the film as some sort of epic where it would have been much more effective to underplay the story and let it stand on its own. Making this more annoying is the fact that the script doesn't really help the audience much and only the sharpest viewer will make it through the first 20 minutes without struggling to get hold of the story and work out who everybody is. In stark contrast to the tight thriller of part 1, this film is a much bigger story and, as such, occasionally struggled to keep me emotionally involved. Sure, the politics of crime were interesting and produced plenty of good stuff but only occasionally did I get behind the characters and struggle to know who to support like I had in part 1 ? in fact the film could have easily lost Yan and Ming without losing much story. However it is still worth seeing as it does manage as a bit of a twisty crime story (but not a thriller) but even as this it doesn't really stand out as being that great. The loss of the great performances from Lau and Leung is a massive hole that neither Chen or Yue ever get close to filling ? the fact that the material gives them no help either is not their fault. As before, Wong and Tsang are both good and they benefit from being the focus of the prequel. Ng is a good addition as Hau and he is suitably professional, cold and has a powerful presence suiting his character ? it also helps that he was very easy on the eye too! As with the prequel, the female parts are pretty thin and the potential to use Lau's Mary better is not taken. Overall this is not a bad film by any means; in fact it is an OK story of crime between the ruling families (as shown by a few individuals) however the film hurts itself by trying to force itself into the shape of a 'sprawling crime epic' when nothing in the material actually justifies this aim. The poor use of Yan and Ming is a problem that is only slightly helped by the increased focus on Sam and SP Wong. An OK film but not a scratch on the original and not even necessary viewing to enjoy that better film.