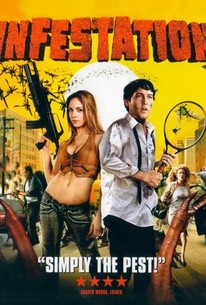 When hapless cubicle dweller Cooper (Chris Marquette) awakens strung up in a silky cocoon, he finds himself face to face with a swarm of enormous, man-eating insects intent on devouring the entire human race. It was his first day on the job, but as nervous as Cooper was coming in to work, he never imagined that things could get this bad. Breaking free of his slimy prison with no time to spare, Cooper races to unravel his coworkers before they're all sucked dry like human milkshakes. With a small battalion of terrified office drones under his command, the company's newest employee fights to find a safe haven, and smash as many creepy crawly invaders as possible along the way. Perhaps in the frenzy of this mutant insect invasion, Cooper will finally summon the courage to break the ice with his pretty colleague Sarah as well.

Infestation is a sticky, schlocky treat.

it is all carried off with a hilariously schlubbish charm, as though the fate of humanity were being left in the hands of The Office's personnel.

Infestation is an unexpectedly fun outing.

A better-than-average-but-still-not-great Creature Feature that thankfully was vastly superior to the similarly themed and similarly named "Infested" from 2002 that I mistook it for.

Energetic and flat out fun, fast paced comedy/horror about a bunch of (alien?) insects that take over the world. Good FX and and a believable cast help make this low budget indy really come through. Plus the hybrids are the coolest/creepiest things I've seen on film in quite a long while. Now where's that damn sequel?

Great zombie bug satire with impressive direction, acting and special effects. A low-budget campy horror B-movie was the dark humour, think Shaun of the Dead, but with insects. Even if the movie has a serious tone, you always get some well done jokes here and there, mostly by the likable anti-hero that just seems to try so hard.

this is a dumbass monster bug movie with all the usual monster movie stuff like the main guy falling in love while running from giant bugs, and the girl he loves just happening to be the other person to survive, and who could forget: Black man sacrificing himself when things go wrong! Chris Marquette's creepy world of warcrafty moustache-less beard doesnt help things.