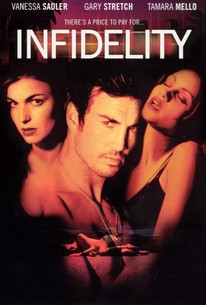 A middleweight boxing champion looking to cut his underworld ties and begin life anew finds that escaping your past isn't as easy as simply packing your bags in this crime thriller from director Jon Hess. Upon moving to Los Angeles to start a new life as a record producer, Shane (Gary Stretch) and his beautiful wife Catherine (Vanessa Sadler) realize that they need a more consistent source of income if they're going to stay afloat. When Shane is introduced to sultry singer Lola (Tamara Mello) it looks like he may have finally found the voice that will launch his career in music. Shane's gold-record dreams turn to dust, however, when Lola is found dead and all signs point to Shane as the culprit. Now, with little time to prove his innocence before Lola's jealous underworld lover Paul Decker (John Shafer) and the authorities close in, this former boxer who thought he left a life of crime behind must journey back into the underworld for one final round.

Five Moments Of Infidelity: Sustains a gentle compassion for most of its characters, however flawed, as Gorman's female perspective on matters of the heart gives a rare equal emotional weight to female delusions and desires.

There are no featured reviews for Infidelity at this time.