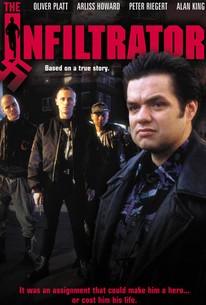 The frightening underworld of neo-Nazism is the subject of this made-for-television drama. Oliver Platt stars as Yaron Svoray, an American journalist who goes to Germany to do a story on neo-Nazis. He gets mistakenly branded a sympathizer of the cause but uses his new status as a way to uncover secret information about the members and their leaders. The movie was based on the non-fiction book co-authored by Svoray called In Hitler's Shadow.

Critic Reviews for The Infiltrator

There are no critic reviews yet for The Infiltrator. Keep checking Rotten Tomatoes for updates!

Audience Reviews for The Infiltrator

A bit underwhelming considering the subject matter and the cast. Still, it's a servicable film with some messages eerily applicable to today.