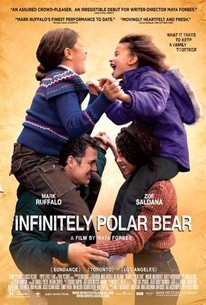 Maya Forbes autobiographically inflected Infinitely Polar Bear stars Mark Ruffalo as Cameron, a man who suffers from bipolar disorder. After a breakdown forces him to leave his family and move into a halfway house, he attempts to rebuild a relationship with his two daughters, and win back the trust of his wife Maggie (Zoe Saldana). When Maggie decides to go to business school in New York, they decide that he will move back in and take care of the day-to-day care for the kids. Due to his mercurial nature, this leads to a series of quirky, funny, and sometimes frightening episodes. Infinitely Polar Bear screened at the 2014 Toronto International Film Festival. ~ Perry Seibert, Rovi

Cynics may scoff at the fact that Infinitely Polar Bear glosses some of the filmmaker's darker memories, but they'll need an ice bucket handy if they intend to avoid its warmth altogether.

Ruffalo is generally wonderful at finding the tone and mood of a character and holding to it; here he has to bounce about, but again he latches onto a consistent energy that makes Cameron a singular life force.

"Infinitely Polar Bear" is a much-needed reminder that the realm of film is still a place to encounter something other than comic-book scenarios.

If the scariness of Cam's illness is portrayed through rose-colored glasses, the realism of the characters shines through in dozens of other small ways.

It's ultimately a feel-good movie with some poignant moments ...

Ruffalo lives into the character of Cam with a level of honesty and vulnerability that won't much surprise those familiar with Ruffalo's indie work.

Ruffalo is incredibly charming, and while Cam's behaviour is often erratic, he is also sweet, funny and endearing. Happily, the same can be said about the film.

Everything about screenwriter/director Maya Forbes' (The Polka King) film is doused in realism. From the family dynamic to the handling of mental illness.

The most interesting aspect of Infinitely Polar Bear is how writer-director [Maya] Forbes brings both the perspective of her own childhood and retrospective insights as an adult and parent in the film.

The heart and sweetness at the film's center help Polar Bear subvert the expectations of the average issue-based drama.

Might have been a very different and far-inferior outcome if not for the casting of a superb Ruffalo.

It's a genuine relief to see actual human stories -- and not only ones that end with a bang -- still being made. This movie is a triumph from beginning to end, with it's biggest strength lying behind Mark Ruffolo's virtuoso/career-best performance, that is only emblematic of the amazing streak of roles this uniquely subtle actor has been giving us in recent years. "Infinitely polar bear" is a wonderful effort from first time director, Maya Forbes who bases the script on her own childhood experience, dealing with a Bi-Polar father. This is, without a doubt, one of the most important and underrated films of the year.

"Infinitely Polar Bear" showcases the talents of Mark Ruffalo in a role unlike anything you have ever seen him in before. Dealing with smoking, drinking, and mental issues simultaneously, his wife leaves him until he is fully recovered. Broke and alone, he comes back home to take care of his kids as his ex-wife leaves to New York to attend school. This film really does center around Mark Ruffalo's character and his arcs are incredible to watch unfold. In the end, this film is a very well-written, well-acted, and well-directed character study that definitely deserves it's awards talk/ "Infinitely Polar Bear" is terrific!

Infinitely Polar Bear seeks to put a smiley face on dad's affliction. That colors this account as a very shallow production. The lives of Father and his 2 daughters are presented as a series of highs and lows with little insight into any of it. As the filtered recollections of a child, that would explain the lack of sense. Obviously the autobiographical tale is a personal project for Maya. Her husband, Wally Wolodarsky, even co-produced. She presents this earnest drama as a sugarcoated valentine to her father who passed away in 1998. I'll give the chronicle points for heart and sincerity. But Maya Forbes can't seem to make the events in these people's lives seem like anything more substantial than quirky gimmicks. The production is merely a whimsical roller coaster of contrivances designed to tug at your heartstrings. Infinitely Polar Bear comes across more like a sunny sitcom called My Goofy Dad than a thoughtful portrait of a man suffering from a serious mental illness. fastfilmreviews.com