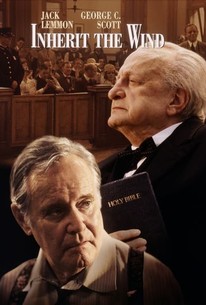 The celebrated stage drama by Jerome Lawrence and Robert E. Lee, based on the real-life Scopes trial in which a teacher was jailed in 1925 for teaching Darwin's theory of evolution, is filmed for the third time in this adaptation produced for the Showtime premium cable network. Jack Lemmon plays the celebrated trial lawyer who defends the teacher in a character based on Clarence Darrow and George C. Scott plays the prosecuting attorney, modeled on William Jennings Bryan; Tom Everett Scott plays the embattled educator.

John Cullum
as Judge
View All

Critic Reviews for Inherit the Wind

There are no critic reviews yet for Inherit the Wind. Keep checking Rotten Tomatoes for updates!

Audience Reviews for Inherit the Wind

Not the masterpiece that the 1960 film was but a very solid rendering of the play which provided the great George C. Scott with a fitting and graceful swan song.