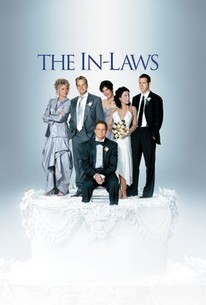 Critics Consensus: Bigger and slicker than the original, but not necessarily better.

Critics Consensus: Bigger and slicker than the original, but not necessarily better.

Critic Consensus: Bigger and slicker than the original, but not necessarily better.

When prospective fathers-in-law Steve Tobias and Jerry Peyser meet for the first time to celebrate their children's upcoming marriage, the cake hits the fan. Dr. Jerome Peyser is a mild-mannered podiatrist with a well-organized daily routine designed to eliminate all possible sources of stress. Meanwhile, daredevil CIA operative Steve Tobias moves through life like a heat-seeking missile. His average day consists of dodging bullets, stealing private jets and negotiating with international arms smugglers. Now he's giving potential father-of-the-bride Jerry a serious case of pre-nuptial jitters. Steve's dramatic entrances and exits, his cryptic references to a Russian runaway named Olga and his fight with a gunman in a restaurant washroom causes Jerry to see a vision of his daughter's perfectly planned wedding blowing up in his face. As far as Jerry's concerned, letting Steve into his family takes "till death do us part" way too literally. Before he can say the wedding is off, Jerry suddenly finds himself embroiled in the chaos that follows in Steve's wake as he is dragged kicking and screaming into a series of perilous adventures that take the mismatched in-laws-to-be halfway around the world.

KC and the Sunshine Band
as Himself

Matt Birman
as Agent at Restaurant

Russell Andrews
as Agent Will Hutchins

Novie Edwards
as Bridesmaid No. 1

Tamara Levitt
as Bridesmaid No. 2

Jeanie Calleja
as Bridesmaid No. 3

Miranda Black
as Bridesmaid No. 4

Gregory Vitale
as Thibodoux Guard No. 1

Jeremy Mosier
as Thibodoux Guard No. 2

Marcel Brouillet
as Thibodoux Guard No. 3

Michel Brouillet
as Thibodoux Guard No. 4

Stefano Rocchetti
as Thibodoux Guard No. 5

Billy Khoury
as Thibodoux Guard No. 6

Luke Vitale
as Thibodoux Guard No. 7

Paul Robbins
as Thief at Thibodoux's

Matthew Lantz
as Dishwasher at the Marriott

Harry Wayne 'KC' Casey
as Himself

David Christo
as Frat Brother No. 1

Aaron Alexander
as Frat Brother No. 2

Perry Perlmutar
as Frat Brother No. 3

Jack Duffy
as The Other Uncle
View All

Critic Reviews for The In-Laws

What we are left with is a movie that carefully aims to be all-family entertainment, but you can't imagine any family member particularly wanting to watch it.

This movie has more misfires than hits.

Douglas is zany when he should be restrained, jubilant when he should be serious, tipping his hat so often that jokes that could almost pass for witty instead come across with all the subtlety of the proverbial bull in the china shop.

Humdrum direction fails to elevate an already bankrupt idea from its relentless doldrums.

Amazingly, the two versions have hit the casting bull's-eye twice in 24 years to provide superior entertainment.

One of the problems with The In-Laws is that it spends as much time with the uninteresting and unfunny wedding story as it does with the spy stuff.

[T]his new 2003 version is nothing like the original but for the premise and the name.

Focuses on two boring old men trying to be tough guys while bonding in convoluted and downright stupid situations. A dud.

Fleming and co. were working from a version that had clicked very well in 1979, and such interest as posterity has in this new take will be in its usefulness as a masterclass in how not to remake a movie.

It's wonderful watching Michael Douglas and Albert Brooks having so much fun. It's also great to see a summer movie that doesn't rely on special effects.

A sloppy excuse for 95 minutes of celluloid . . . Andrew Fleming's film should be outlawed for its sheer laziness alone.

Audience Reviews for The In-Laws

Unnecessary remake of a classic comedy.

Saw this a very long time ago. I remember I loved it, primarily because of Michael Doublas' hilarious performance. Grade: C+

Oh man! I watched this because of Ryan Reynolds. But he was sorta like a special guest in it. It wasn't funny though. Don't waste your time on it.

This Movie caused me a Headache.