The Inn of the Sixth Happiness1958 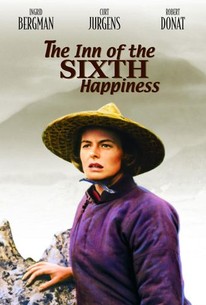 The Inn of the Sixth Happiness Photos

Alan Burgess' novel The Small Woman was the source for the British/American co-production Inn of the Sixth Happiness. Set in the China of the 1930s, the film stars Ingrid Bergman as real-life missionary Gladys Aylward. Against the advice of practically everyone, Gladys heads into the war-ravaged interior to spread the Christian gospel. She finds a powerful ally in the form of an elderly Mandarin (Robert Donat) who, despite his early efforts to rid himself of the troublesome Gladys, eventually converts to Christianity. Gladys' burgeoning romance with Chinese army officer Lin Nan (Curt Jurgens) is interrupted when she is obliged to guide a group of Chinese children to safety over some of the most treacherous of Northern China's mountain regions. Inn of the Sixth Happiness retains its entertainment value some four decades after its production, even allowing for the preponderance of Occidental actors in Oriental roles. The film also served to breathe new life into the old children's nonsense song "This Old Man" (aka "Knick, Knack, Paddywhack"). ~ Hal Erickson, Rovi

Lian-Shin Yang
as Woman With Baby

Critic Reviews for The Inn of the Sixth Happiness

At least one third could easily he trimmed out of the running-time of two hours and forty minutes of this celluloid opus but those who don't mind ultra-length will be rewarded by one of Ingrid Bergman's warmest performances.

The Inn of the Sixth Happiness is an inspiring story and a well made movie. It has the historical epic feel you'd expect from a film with such scope.

If you're put off by the missionary impulse, then this film probably isn't for you-even though Bergman brings an honest earnestness to the film that's hard to resist.

Sweeping, melodramatic, and brimming with positive messages about morality and virtue, Mark Robson's epic film embodies many of the values idealized in the Eisenhower era.

Mark Robson's loose adaptation of a British missionary's tale is well intentioned and well acted by Ingrod Bergman, but suffers from the casting of the Asian roles with actors like Robert Donat or Curt Jurgens.

Audience Reviews for The Inn of the Sixth Happiness

It isn't a white man in China but rather a white woman saving the day. For that point alone, I reduce it by a star but you can't stay too upset with this film. It has good performances and an interesting story line.

Finely wrought drama of a truly brave selfless woman. Not a lot of Hollywood artifice just a simple story of someone who felt a calling and pursued it with single minded determination to find it made her life one of meaning and importance. Ingrid Bergman is perfectly cast here and give a beautiful performance supported by a fine Curt Jurgens and especially the touching and dignified Robert Donat in his last film. A winner.

Ingrid Bergman is both beautiful and compelling in this story of an English missionary in China. Her presence elevates what would otherwise be an ethnocentric and somewhat dated film.

Extraordinary and courage true story of an English missionary, Glady Aylward, in China who leaded 100 orphaned Chinese children to safety across enemy-hold terrian through WWII.

The Inn of the Sixth Happiness Quotes