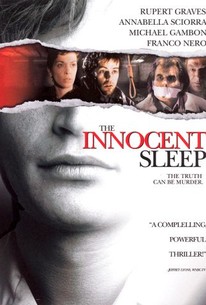 In this suspense drama, Alan Terry (Rupert Graves) is a homeless man who wanders the streets of London. One night, Alan is trying to sleep near a bridge when he witnesses a strange and grisly murder; a man, speaking Italian, is hanged by four other men, one also speaking Italian while the other three have British accents. When Alan's presence is discovered by the killers, they give chase, and Alan is barely able to escape. However, the following day the papers report the death as a suicide; on the advice of his friend George (Graham Crowden), Alan goes to the police to tell what he saw. However, when Alan is introduced to Detective Matheson (Michael Gambon), the man investigating the case, he realizes that Matheson was one of the men who helped hang the victim. Assuming that Matheson would not be a good person with whom to discuss the case, Alan instead goes to Billie Hayman (Annabella Sciorra), an American journalist working in London who is able to bring Alan's side of the story to the people; Alan and Billie soon discover that this murder is far more complicated, and with more disturbing implications than they ever could have imagined. Though fictional, The Innocent Sleep was inspired by the true story of the death of Roberto Calvi, an Italian banker who was murdered in London in 1982.

Ben DeSaumserez
as Assassin
View All

Critic Reviews for The Innocent Sleep

Though the narrative falters by the third act, the tight pace and gorgeous bluish tinted photography by Dunlop keeps it all watchable.

There are no featured reviews for The Innocent Sleep at this time.