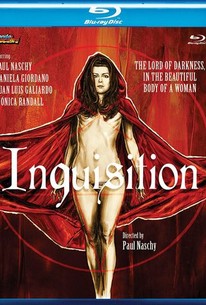 Spanish horror star Jacinto Molina's directorial debut was this gory shocker patterned after the Austrian cult classic Hexen Bis Aufs Blut Gequaelt (aka Mark of the Devil), although purportedly based on a true story. Acting under his usual pseudonym of "Paul Naschy," Molina stars as Judge de Fossey, who hunts witches in plague-ridden 1500s France. He falls in love with a suspected witch (Monica Randal), unleashing his repressed desires. The usual torture and murder of naked women ensues, until the judge is burned alive as a warlock. The predictable storyline is livened up with some wonderfully atmospheric production design by Gumersindo Andres, and Molina's growing legion of fans should enjoy it. Daniella Giordano and Eduardo Calvo co-star. ~ Robert Firsching, Rovi

There are no critic reviews yet for Inquisition (Inquisición). Keep checking Rotten Tomatoes for updates!

There are no featured reviews for Inquisition (Inquisición) at this time.