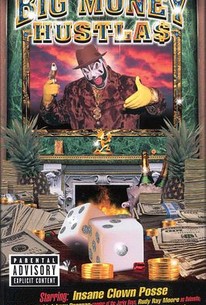 Johnny Brennan
as Chief of Police

Jumpsteady
as Hack Benjamin
View All

There are no critic reviews yet for Insane Clown Posse: Big Money Hustla$ - The Movie. Keep checking Rotten Tomatoes for updates!

Going into this and only hearing maybe half of an Insane Clown Posse album I had no to low expectations. Admittedly I wasn't sober when I saw this but I actually caught myself laughing a lot. Sure, the humor is dumb, juvenile and oftentimes disgusting but I had fun watching Big Money Hustlas. The production values were admittedly weak (but even the movie's script acknowledges this) but this movie is either one of the crappiest ever made or its one of the best pieces of satire ever done. If you can appreciate or enjoy crap you might get a kick out of this movie but otherwise I'm guessing you've got to be an ICP fan.