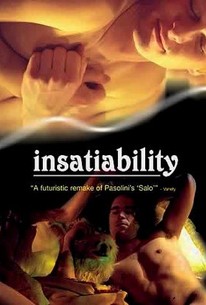 The handsome heir to a successful Polish brewery becomes corrupted by a decadent princess and her psychotic, sexually salacious, homosexual hunchback jester in Body Without Soul director Wiktor Grodecki's daring adaptation of Stanislaw Igncay Witkiewicz's controversial, 1930s-era novel detailing the ultimate downfall of western civilization. China has set into motion a relentless invasion of Eastern Europe, and as the chiseled idealistic heir ponders the implications of such an act of warfare, the beautiful princess Irina seizes the opportunity to lead him into a life of sexual deviance while setting her sights on his vast fortune. The princess isn't the only one that the confused eighteen-year-old heir has to worry about though, and as the mad monk jester makes a play for his purity, it seems that there is no turning back from a world where war and sex have become permanent partners. ~ Jason Buchanan, Rovi

There are no critic reviews yet for Insatiability. Keep checking Rotten Tomatoes for updates!

There are no featured reviews for Insatiability at this time.