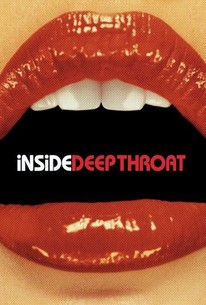 Critics Consensus: A documentary on the film that brought smut mainstream, Inside Deep Throat is gaining praise as an entertaining look at a pop culture milestone. However, some critics say the film could have gone a little deeper into the people involved.

Critics Consensus: A documentary on the film that brought smut mainstream, Inside Deep Throat is gaining praise as an entertaining look at a pop culture milestone. However, some critics say the film could have gone a little deeper into the people involved.

Critic Consensus: A documentary on the film that brought smut mainstream, Inside Deep Throat is gaining praise as an entertaining look at a pop culture milestone. However, some critics say the film could have gone a little deeper into the people involved.

An examination of the unanticipated lasting cultural impact generated by "Deep Throat", a sexually explicit film first shown in a midtown Manhattan adult theater in June 1972 that quickly became the flashpoint for an unprecedented social and political firestorm.

Critic Reviews for Inside Deep Throat

A sharp documentary that has comedy, tragedy and, yes, a glimpse of Linda Lovelace's party trick.

Bailey and Barbato can only scratch the Boogie Nights-influenced surface, but they cover the ABCs of pornography with undeniable zip.

[A] valuable document of a cultural shift.

Fascinating social criticism and a witty and relevant take on American sexual history.

The absorption of Deep Throat into the political melodrama that was Watergate seems to have led to some grandiose statements in Messrs. Bailey and Barbato's documentary.

[S]o much of the material is served up with a wink and "a giggle," the possibilities for real revelation are scarce.

A candid portrait of an America reasserting its conservatism in the 1970s and attempting to crush the 60s-spawned counterculture.

Three days after President Nixon brought a halt to military operations in Vietnam, another offensive maneuver was just beginning in Minneapolis.

This keen look at the most successful independent film ever made describes how the film's distribution and profits were taken over by the mob, and how its director and actors were affected be the social and political powers that sought to use it as a tool

A polemic on America, and its incapability to be accepting of sexuality by demonizing and stigmatizing the act...

Move over, Alfred Kinsey. Apparently the unusually avid sex researcher's knack for shaking up the gatekeepers of traditional moral values, may have been a mere dress rehearsal for Deep Throat a few decades later.

Audience Reviews for Inside Deep Throat

Inside Deep Throat tells the story of one of the most famous Adult films in the genre. Deep Throat was one of the first porn films to cause outrage at the time of its release due to the fact that it showed explicit sexual material, which was unheard of at the time. The documentary takes a look at how the film revolutionized a new movement. The film is interesting and it goes in depth in discussing the success of this notorious film. The subject is interesting and the documentary filmmakers get interviews from many celebrities, filmmakers and people involved in the making of Deep Throat. For those interested in the subject, this is a great documentary to watch, but is not for everyone. The interviews are well conducted and some are humorous, and serious. Deep Throat was one of the most notorious Adult films ever made, as in 1972 it broke new ground in good taste. This film shows the story of the making of the film along with its legacy. The film also shows how some people that seek to ban the film were hypocritical because they went and saw the film multiple times. This is an interesting film, and I really enjoyed the interviews, especially the ones where director John Waters, Hugh Hefner and Bill Maher tell how the film became a phenomenon. Not only does the documentary look at the film's impact, but it looks at censorship and freedom of speech, which is also quite interesting. Inside Deep Throat is a great documentary that is worth seeing.

Great documentaries come around once in a long time. And one of those is certainly Fenton Bailey and Randy Barbato's homage to the most successful pornographic film ever made. Inside Deep Throat not only provides an interesting history to the blockbuster hardcore film, but also provides the gravity of its impact and the influence of pornography on the culture. And as the film progresses, we see the increased stranglehold of censorship on artistic freedom and the devolution of the pornography from a rebellious art form coinciding hand-in-hand with the sexual revolution and the earliest stages of the feminist movement to a sleazy cash machine devoid of practically any value or effort. Though I wouldn't say Deep Throat was an artistic masterpiece, but its impression on American media history is impossible to ignore. This is one documentary that puts the current battles of censorship and freedom of artistic expression through sex in mainstream media used more than simply smut for the sake of smut to set under the microscope, and dissects it very well from the people who lived the lives of those who were involved in such an important bit of history. This film almost couples in time with Kirby Dick's amazing documentary This Film is Not Yet Rated which emerged the year after Inside Deep Throat.