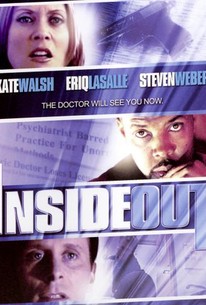 A suburban homeowner becomes obsessed with the secretive family next door in this independent drama. Norman (Steven Weber) is an airline pilot who one day discovers he has new neighbors when he hears them moving into a nearby house during the dark of night. While Norman soon learns that Dr. Peoples (Eriq La Salle) is a psychiatrist, he can't figure out much else about him, beyond the fact he only mows his lawn after the sun goes down. Eager to uncover the enigma of the folks next door, Norman becomes friendly with Maria (Nia Peeples), the doctor's wife, and reaches out to their phobic son, Obert (Tyler Posey), but Dr. Peoples himself remains a mystery. As time goes on, Norman also discovers he's not the only one in the neighborhood eager to know more about the mysterious new arrivals. Inside Out was the first feature film for writer and director David Ogden.

Critic Reviews for Inside Out

...a misguided and misbegotten endeavor through and through...

The sort of lurid and preposterous suburban thriller that is usually seen only on the direct-to-video rack.

This is a ridiculous, laughable thriller that will only sell extra tickets to those needing a laugh partner, since its no fun making sarcastic remarks to strangers.

Confusing and unsatisfying, held together only by some good performances by underrated TV veterans.

Audience Reviews for Inside Out

This movie was better than I thought. Suspenseful and holds the interest throughout the entire movie. Good ending as it brings almost everything together. Some things I was still puzzled about, but all in all I love movies like this. Not oscar worthy, just pure entertainment and suspense.