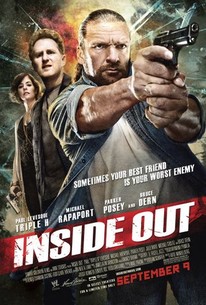 For the last thirteen years AJ (Triple H) has been behind bars, convicted of manslaughter for killing a man who intended to kill his best friend, Jack (Michael Rapaport) a high-strung low-level mobster. Now released, AJ wants nothing more than to start a small business and live a life free of crime. Unfortunately, within hours of leaving prison, Jack involves AJ in an accidental shooting leaving a man dead. When Jack's father, local mob boss Dr. Vic (Bruce Dern), hears the news he wants the mess cleaned up, and fast. With the authorities hot on his trail, Jack is now forced to skip town. Well aware of Dr. Vic's violent past, AJ will stop at nothing to protect Jack's wife, Claire (Parker Posey), the woman he's always loved and her daughter Pepper (Juliette Goglia). -- WWE Studios

News & Interviews for Inside Out

View All Inside Out News

Critic Reviews for Inside Out

If many of the script's circumstances seem a bit too convenient, Mandelberg's direction provides a cavalier "what next?" verve that invites incongruity.

Loyalties are tested and Scorsese ripped off until audiences may feel as if they're in a movie deathlock.

Shooting for stoic, Mr. Levesque only delivers inert. And the plot devolves into a tangle of dithering story lines.

I can say with only a little irony that Triple H acts Parker Posey off the screen.

As bloated as its star's pectoral muscles and as lastingly resonant as any random episode of SmackDown.

Barely workmanlike domestic drama by a lawyer-turned-screenwriter and a TV producer-director, each making their first feature-a vehicle for pro wrestler Triple H as an ex-con.

How about we put our money together and hire someone to write Levesque, Posey and White a script that doesn't feel like a USA Network action show reject?

I have no idea what happened in Inside Out. None.

Setting the instantaneous zany mood is Rapaport, a Big Easy bottom feeder gangster rambling about bad karma and how 'Jesus died so we could all be assholes.' Then toss in Dern's bad parenting medical maniac, for a truly pickled thriller.

A scattershot throwback that steals elements from seedy '70s character studies, disreputable '80s vigilante flicks, even street-tough allegories from the '30s, Inside Out also dances to the confidently unhurried beat of its own drum.

Lawyer-turned-screenwriter Dylan Schaffer's script is an unhappy combination of genres, tones, too many dead stretches of people in cars and inept dialogue.

Audience Reviews for Inside Out

Pretty much a peace of trash, Inside Out is an extremely boring movie that should be among the worst movies of all time. If you have read the movie description, you somewhat know everything. A man getting out of prison after thirteen years... interested in reforming his life... and then messed up in an idiotic scenario... But the movie is far worse than this description. Interestingly, it doesn't even have anything for wrestling fans, like melee fights or body figure scenes showing off HHH. Stick to WWF or WWE or what ever its called noe. A Good Teeny Bobber Movie. 1 Star 3-27-14

A sharp, intense and character-driven crime-thriller. A real dish out of character study, drama, gritty action and suspense. Paul Triple H Levesque and Michael Rapaport are excellent, these guys have solid chemistry that just adds more to the film and has lots of strength. Triple H has such great dramatic ability that is surprsing considering his background, but he makes it work and especially with other great liks, Bruce Dern and Parker Posey by his side and not to mention Rapaport who always seems to be a joy. An exciting and thrilling first-time feature from the director and writer.

~From Prison to Pickles~ Sometimes the only way out is back in! AJ (WWE superstar Paul Levesque aka Triple H) has spent the past thirteen years in prison for manslaughter before he is released. Meeting up with his best friend Jack (Michael Rapaport) he is ready to start his life over. So he doesn`t lift an eye brow even when told that Jack married the love of AJ`s life, Claire (Parker Posey) and raised their daughter, Pepper (Juliette Goglia) all this while AJ was laid up in the joint. In fact AJ`s goal now is to make and sell pickles (umm...what?!) but when Jack messes up his plans AJ realizes he has one more thing to do before he can leave his old life behind. Bruce Dern stars as Jack's father, a local crime lord who's looking for some new muscle and has his eye set on AJ. As you no doubt realize, the conflict here is AJ's trying to resist being pulled back into his old life. Do you think he`ll make it? A little bit disappointing for me as it doesn't even have anything for wrestling fans, like fights or body figure scenes showing off Triple H just some cheesy looking explosions - kaboom!! "Did you know that profits from cigarette smuggling are a big source of funding for terrorism?" (Yea I too laughed when I heard that mentioned in the film and was like WTH but we all know the side effects of smoking when it comes to your health and about the diseases that smoking can cause. I say we all quit smoking NOW and live longer!!!)