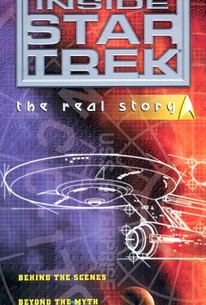 Star Trek is nearly immortal and in that most fickle of mediums, television, that's saying something. This program goes "Beyond the scenes, beyond the myth" to provide a nuts and bolts view of the little-known process of getting the show onto the screen. Normally unseen by the viewing public, the writers, directors, producers, and other network decision-makers are interviewed about their roles and struggles in bringing the quest of Starship Enterprise to the small screen. There are no interviews with the big players such as creator Gene Roddenberry or actors William Shatner and Leonard Nimoy, since the focus of this documentary is to provide a window onto pre-production aspects of the series.

Critic Reviews for Inside Star Trek: The Real Story

There are no critic reviews yet for Inside Star Trek: The Real Story. Keep checking Rotten Tomatoes for updates!

There are no featured reviews for Inside Star Trek: The Real Story at this time.