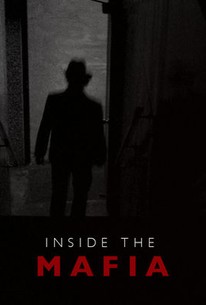 Thanks to the notorious gangland conference in Appalachian, New York, the word "Mafia" was on everyone's lips in 1959. Rushing to capitalize on this fact was the low-budget expose Inside the Mafia. Grant Richards plays a Lucky Luciano type who is about to return to the US after several years' deportation. Richards arranges for an upstate New York gangland meeting, where minor mob functionary Cameron Mitchell plans to depose big boss Ted DeCorsia. Mitchell also intends to murder Richards so that he can rule the Mafia unfettered. But Richards is still master of his own fate, and he guns down his competition during the gang conference before surrendering to the police. Inside the Mafia told the public little that wasn't already known, but the film served its purpose of cashing in on a "hot" title. ~ Hal Erickson, Rovi

Jack Daley
as Joe the Barber

Critic Reviews for Inside the Mafia

Virtually nothing is disclosed about the infamous fraternity mentioned in the title.

A flat fictionalized version of the infamous Appalachian Mafia meeting in the 1950s.

There are no featured reviews for Inside the Mafia at this time.

Inside the Mafia Quotes