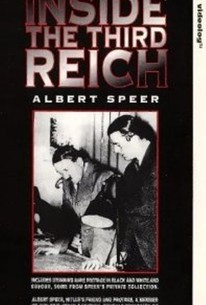 The two-part TV movie Inside the Third Reich was based on the extraordinary revelatory (if self-serving) autobiographical book by Albert Speer. Played herein by Rutger Hauer, Speer is a young man of privilege in pre-Hitler Germany who happens to be a brilliant architect. Becoming a member of Hitler's inner circle, Speer is appointed the Nazi regime's master builder. According to this film, Speer is egomaniacal and ambitious, but somewhat blinded to the inherent evils of Nazism. Though he'd later claim to be ignorant of Hitler's horrific policies aimed at the Jews, he was certainly aware of the use of Jewish prisoners as slave labor: as Germany's armaments minister during World War II, Speer exploited these enslaved unfortunates as much as anyone, if not more so. The cast includes Derek Jacobi as Hitler, Blythe Danner as Speer's wife Margarethe, John Gielgud as Speer's father, Ian Holm as Goebbels, Maurice Roeves as Hess, and George Murcell as Goering. Originally running 5 hours, Inside the Third Reich was filmed in Munich; it was first telecast on May 9 and 10, 1982.

Critic Reviews for Inside the Third Reich

The biggest scene-stealer is Derek Jacobi as Hitler; he conveys a cracked kind of egomania, which just might be accurate history.

Audience Reviews for Inside the Third Reich

There are no featured audience reviews yet. Click the link below to see what others say about Inside the Third Reich!

Inside the Third Reich Quotes