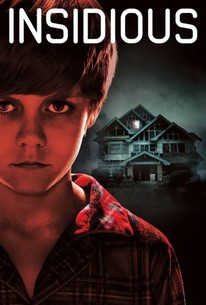 Critics Consensus: Aside from a shaky final act, Insidious is a very scary and very fun haunted house thrill ride.

Critics Consensus: Aside from a shaky final act, Insidious is a very scary and very fun haunted house thrill ride.

Critic Consensus: Aside from a shaky final act, Insidious is a very scary and very fun haunted house thrill ride.

Saw franchise veterans James Wan and Leigh Whannell team with Paranormal Activity writer/director Oren Peli to give the familiar haunted house story an exciting new twist with this tale of a family that moves into an old house and begins to suspect they are under siege from otherworldly forces when their young son inexplicably falls into a deep coma. As devoted parents Josh (Patrick Wilson) and Renai (Rose Byrne) struggle in vain to uncover the root cause of their son's condition, the stress of the situation gradually begins to take its toll on their once-strong relationship. Later, when darkness falls and specters appear to reach out for them from the shadows, the frightened parents realize they're dealing with powers beyond human comprehension. ~ Jason Buchanan, Rovi

Director James Wan here proves himself very adept at building dramatic tension and making you anxious about the things going on in your peripheral vision.

If the film was attempting to be more than just a horror movie, it doesn't work on that level either.

A supernatural horror flick by and for horror buffs.

For the most part it's standard stuff.

Good for a handful of jumps and guilty giggles before it quickly reaches for the slipshod, hokey contrivances you don't expect until number 2 or 3 in the franchise.

Plays out in such a high, trilling key of baroque anxiety it's both jumpy and ludicrous.

With Insidious, Wan and Whannell prove that they are not just one-trick ponies and deliver one of the scariest and best horror films of the new century.

What it does it does with enough thrills, chills, and laughs to make it easily worth a view for connoisseurs of all things horror.

If Insidious were willing to really embrace the connection between insidious possession and the insidious allure of gender deviance, it would be a much better film.

A scary movie that doesn't rely heavily on CGI and gore like many horror movies of today, but rather more on plot and interesting characters.

Despite following a fairly formulaic narrative, Insidious pulls off more than the usual compliment of spine-tingling scares and memorably grotesque imagery

A cinematic version of one of those corny Halloween houses.

Very well directed and certainly one of the scariest movies I have seen in the past few years, this smart horror movie knows how to avoid the clichés and maintain a constant tension instead of going for the cheap scares - and it really knows how to scare the hell out of the viewers.

I tried, but I just couldn't get interested in this. The three screaming kids were way more scary than anything else going on in that house. I gave up half hour in. Just found it boring, and I didn't care about any of them as characters.

I don't usually do horror movies, but this one was actually pretty good, even if I did spend a great amount of time talking and yelling at the TV to distract myself from potential jump scenes.