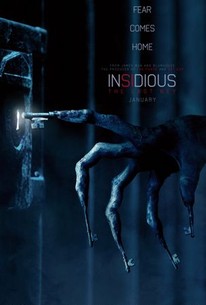 Adam Robitel helms the fourth entry of the Insidious series, with Chapter 3 director Leigh Whannell providing the script, centering around parapsychologist Elise Rainier (Lin Shaye) and her continued voyage into the "further".

New On DVD in April: Paddington 2, Phantom Thread, The Post and More
Box Office: Game Not Over for Jumanji Which Smashes $750M Global
Box Office: Jumanji Tramples The Competition Again

Director Adam Robitel creates a tone unlike anything his predecessors generated; mournful yet warm, the movie engenders sympathy for the characters even as the action turns somber or gruesome.

Overall this is a predictable horror movie that relies on jump scares rather than mental darkness. Insidious may have run its course.

While the Insidious series has given Shaye a rare moment in the spotlight, there's a sense in which Elise has been cursed by Hollywood's endless demand for sequels.

A lot of the strengths of this movie comes from the performance by Lin Shaye as Elise. She's always good, but this film entirely focuses on her character, so she gets to shine a lot... and she really does.

Elise is a worthy hero, and a singular one, too.

You can expect the fun scares these films have provided over the last eight years, but after four films, it seems they are struggling to follow through in the last act. Providing a finale that is undeserving for a respected franchise.

...a surprisingly enthralling capper to a series that was on the verge of running out of steam.

[It operates] only to either telegraph a jump scare with its silence or drown the viewer in a cacophony of noises that are far more annoying than unnerving.

Insidious: The Last Key is a letdown from its predecessor, yet not as much as Chapter 2 was after the first.

Insidious 4 is fun, smart and frightening, an engaging movie that has a handful of creative scares and although it trips a bit at the finishing line, the amount of heart on display for the characters and the fans makes it a thoroughly entertaining watch.

The film isn't a total bust, but having linked it back to the original film, it seems like a good time for creators Wan and Whannell to call it quits on a largely successful horror series before things get so stale it becomes an embarrassment.

Tying up the series, Insidious: The Last Key is a mediocre horror film that delivers some mild scares. When Elise receives a call from a man living in her childhood home about a malevolent spirit, she decides that it's time for her to go back and confront her past. Unfortunately the writing isn't that good, as the plot is chalk full of clichés and tired old tropes. There are also a number of contrivances forced in to connect the film to the previous ones. And the ending doesn't really make a lot of sense. Still, the ghost investigations and confrontations are pretty intense and suspenseful. Also, the prison setting and creature design for the main villain are kind of creepy. Insidious: The Last Key, while it has its problems, is a fairly solid supernatural thriller that's about on par with the rest of the series.

Everything that made the first Insidious so effective and scary is gone now, and so there is basically nothing worth watching in this pointless, lazy and stupid movie that underestimates the viewer's intelligence all the time with endless plot holes and cheap scares.

Thrills and scares.....not going to lie the insidious franchise is one which I greatly enjoy!

Insidious is a franchise that I've been following since the release of the first film back in 2010. This franchise had an extremely strong start and the first installment was actually a favorite horror film of mine for quite some time. I still love watching that film, but each connective film has gotten progressively worse each time, building a franchise that's slowly fizzling out. Insidious: The Last Key is the fourth film to hit theatres in this franchise and quite frankly, even though it has its moments of terror, it's really not that great of a film. If you're a fan of the franchise, there are aspects that are worthy of fans seeing, but I wouldn't say the movie impressed me on many more levels than that. Let's dive into the story. Taking place not too long after the events of the first two films, Elise explores her past and how it interconnects with everything that has happened throughout the franchise so far. Having to face her dark past, while trying to save the lives of everyone around her, this film still has this likable character in the forefront. That being said, this is a film that suffers from trying to connect itself to previous films, making certain scares feel incredibly forced, taking me out of the overall story. Without spoiling it for fans, there are certain sequences that directly relate to past films, right down to actually showing old scenes, but they felt out of place, due to the nature of the story at hand. This film felt the most distant from anything else in the franchise, so when it connects itself to previous story threads, it felt unnecessarily complex. So yes, this is the weakest installment and it very rarely feels like an actual Insidious movie, but I must admit, there are some really solid scares scattered throughout this movie. If for nothing else, horror junkies will get a kick out of some really terrifying moments here. Whether it's a figure standing in the background in a unique way, a creepy conversation happening between children, great uses of sound effects to make you squirm in your seat, or just slowly taking its time to build tension for a nice payoff, Insidious: The Last Key is pretty impressive. If you're in it simply to have a few great scares, then this will probably satisfy you just fine; However, scares are not everything when it comes to horror films. I want to be transported into a unique world when I watch a horror film. The majority of horror films deal with supernatural aspects and therefore require you to open your mind to strange possibilities. Sadly, I felt as though each one of the previous films had far more interesting ideas sprinkled throughout them, that this just felt like one big disappointment. I found myself wishing that the premise itself was better, especially when the twists occur, because many of them are just average slasher flick surprises. In the end, Insidious: The Last Key is impressive when it comes to genuine scares, but lacks in almost every other aspect. Yes, I jumped out of my seat on multiple occasions, but that's not enough to make me recommend this movie. Hardcore horror junkies will get a few kicks out of it, but the screenplay is derivative of so many previous horror movies, it does nothing new to expand on The Further, which was so interesting in the first two films, and I left this movie feeling slightly cheated as a fan. It didn't have the special feel that the others did and if it didn't have the few direct tie-ins that it showcases, it really could've been titled anything else. I'm not tearing this movie apart, it's just incredibly mediocre.