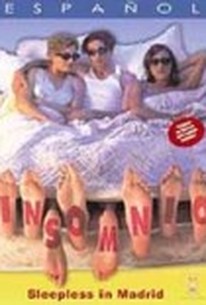 In this Spanish comedy-drama, yuppie Eva (Christina Marcos), employed in TV production, is kept awake by her baby. Real estate salesman Juan (Ernesto Alterio) is due to marry Isabel (Maria Pujalte), a compulsive shopper. Dropped by her boyfriend, Alba (Candela Pena) turns to alcohol and sex. The plot threads become interlinked as Eva befriends Juan and also hires Alba as a babysitter. Nerves grow taut as the wedding day approaches for Juan and Isabel. Not to be confused with several other works carrying this same title -- the 1994 German comedy; Stephen King's 1994 novel; the 1996 Steve Marshall movie with Monica Ford; or the 1997 Norwegian psychological thriller with Stellan Skarsgard. ~ Bhob Stewart, Rovi

There are no critic reviews yet for Insomnio. Keep checking Rotten Tomatoes for updates!

There are no featured reviews for Insomnio at this time.