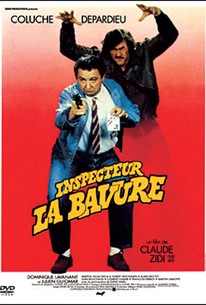 In one of Coluche's earlier films, the late French comedian stars in this standard comedy by Claude Zidi as the inept police inspector, Michel Clement. The senior Clement was a spectacular policeman, and Michel finds it particularly difficult to try and walk in his father's footsteps without tripping. At the moment he is after Roger Morzini (Gerard Depardieu), a dangerous gangster who eventually kidnaps Marie-Anne Prossant (Dominique Lavanant). She is a journalist traveling with Michel as he tries to track down Morzini. Her objective was to get an interview with the gangster, and now she has more than she bargained for. Meanwhile, Michel tries to get his act together and rescue her. ~ Eleanor Mannikka, Rovi

There are no critic reviews yet for Inspecteur la Bavure (Inspector Blunder). Keep checking Rotten Tomatoes for updates!

There are no featured reviews for Inspecteur la Bavure (Inspector Blunder) at this time.