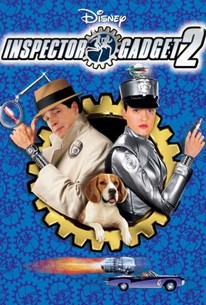 3rd Rock From the Sun's French Stewart steps into the shoes previously filled by Matthew Broderick in this straight-to-DVD sequel to Disney's Inspector Gadget. Arch-nemesis Dr. Claw is back to his evil ways, causing havoc for Inspector Gadget and the citizens of Riverton. Adding an additional twist is G2 (Elaine Hendrix), a new robot cop who provides a little crime-fighting competition to Gadget. Directed by Alex Zamm, Inspector Gadget 2 also stars Caitlin Wachs. ~ Matthew Tobey, Rovi

A much better film than the original

Featuring a truly awful screenplay and more overbaked CGI detritus than you can shake a claw at, IG2 is a loud and garish and oppressively off-putting experience.

...clearly aimed at six-to-ten year olds, who will miss most of the film's in-jokes. But the in-jokes are not funny, anyway, so it's no great loss.

A reactor leak at the Crayola factory.

I'm sorry, but I have no idea how this was able to pass as a sequel, because the logic behind everything in this film makes no sense. Each and every cast member acts completely different than they did in the first film, and although the first movie was not very good, this fails upon everything the first one did correctly. By not showing Claw's face, they stay true to the television show, but everything else has nothing to do with it and is all very silly and made up. The writing is atrocious, the film is very unfunny, and the visual effects are disgusting. "Inspector Gadget 2" is one of the worst films I've seen!

Eh. Good for the kids I guess.