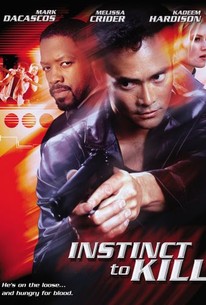 An abused wife strikes back at her murderous husband in this action thriller from director Gustavo Graef-Marino. Shortly after her marriage to police detective Jim Beckett (Tim Abell), naïve ex-cheerleader Tess (Missy Crider) discovers that her new husband has a nasty habit of marrying and later disposing of the brides when he tires of their company. As Jim moves in for the kill, Tess narrowly escapes with the help of detective Lance Difford Kadeem Hardison). Her relief is short lived when Jim makes a break from jail, and the terrified Tess quickly turns to ex-cop-turned-self-defense guru J.T. Dillon (Mark Dacascos) for a crash course in busting skulls. Now hot on his wife's trail, Tess must prepare herself for the inevitable confrontation that lies ahead.

Critic Reviews for Instinct to Kill

There are no critic reviews yet for Instinct to Kill. Keep checking Rotten Tomatoes for updates!

There are no featured reviews for Instinct to Kill at this time.